Warhammer 40,000: Darktide – Everything You Need to Know About Fatshark’s New Game 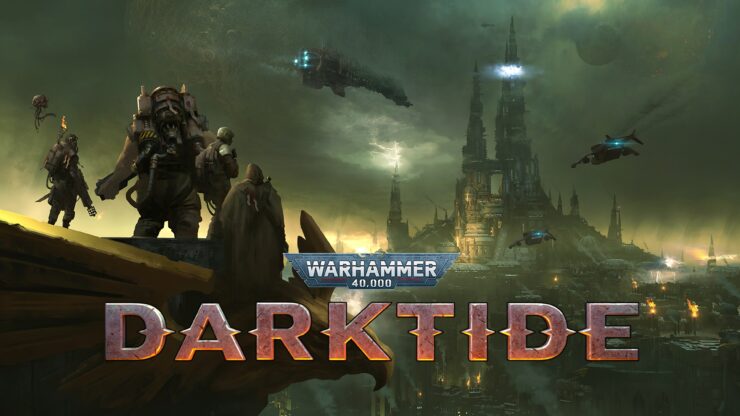 Warhammer 40,000: Darktide is a spiritual successor to the popular co-op Warhammer Vermintide games. The Swedish developer Fatshark is moving from the Warhammer fantasy setting to the sci-fi Warhammer 40K universe, which inherently requires several changes to the formula.

The game originally targeted a 2021 launch window, though Fatshark officially delayed it to Spring 2022 about a year after the announcement. Then, a smaller delay nailed down the release date of Warhammer 40,000: Darktide to September 13th, 2022.

The standard edition can be pre-ordered now for a price of $39.99, though it will also be available as part of the Game Pass subscription.

The Imperial Edition is priced at $59.99 and includes the following items: 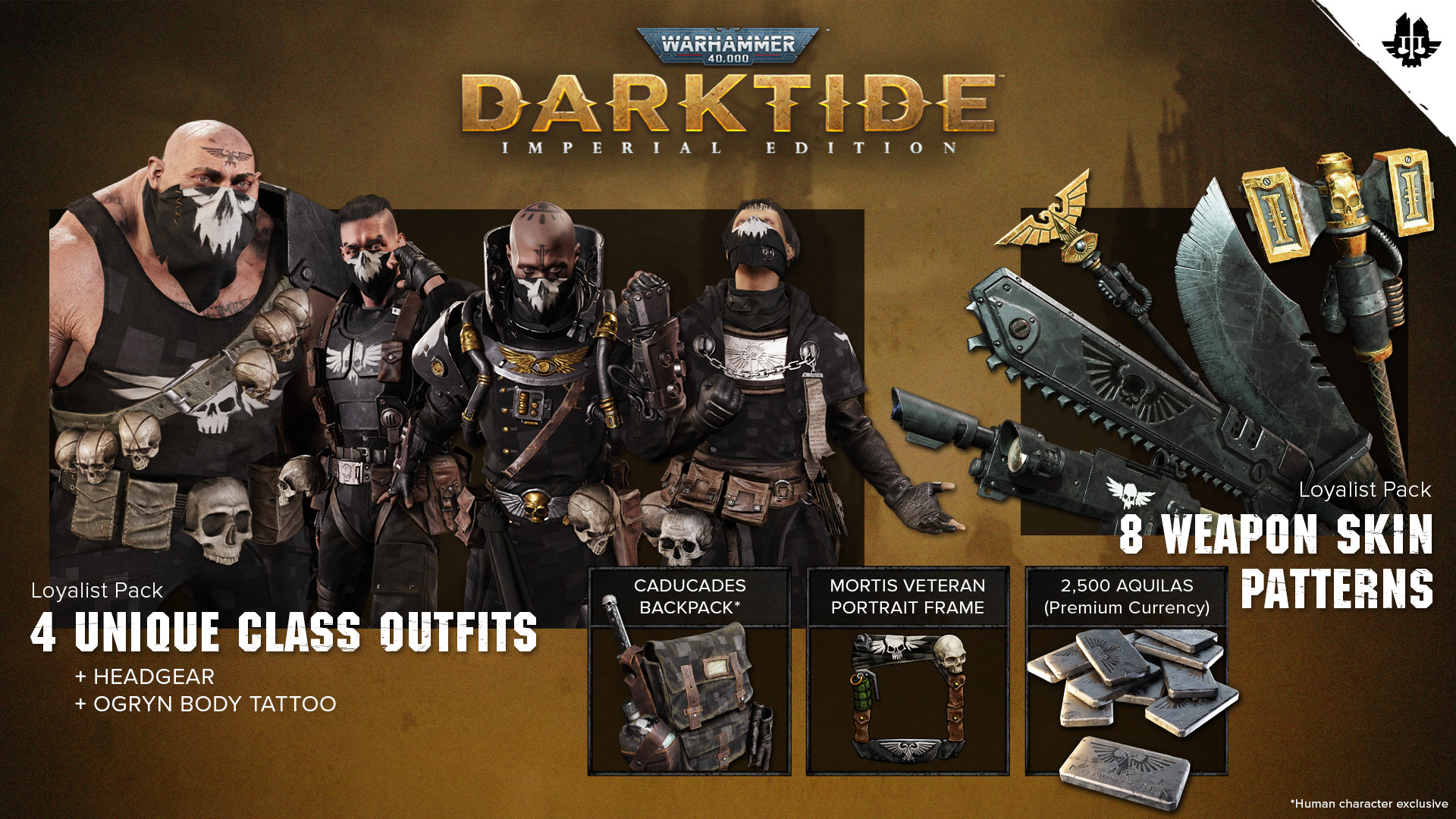 Pre-ordering any version of the game provides the following bonus items:

Warhammer 40,000: Darktide is an action game played in first-person view with a focus on cooperative gameplay, just like the Vermintide titles.

The game is set in Tertium, a hive city located within the Atoma Prime world. Atoma Prime lies at the center of the Moebian Domain, a vital fiefdom composed of several Imperial worlds that manufacture vast amounts of goods for the Imperium of Man. The Moebian Domain is however threatened at its borders by both Xenos (hostile alien races) and Daemons (forces of Chaos), colloquially called the Darktide. As such, many regiments of the Astra Militarum were raised on Atoma Prime to protect against these threats.

Eventually, though, Chaos forces sent by Nurgle, the Lord of Decay, managed to infiltrate Tertium with the so-called Admonition cult. Chaos also turned some of the aforementioned regiments, such as the decorated Moebian Sixth, to its side. A Lord Inquisitor is subsequently dispatched to Tertium, where he orders a handful of convicts - the player characters - to be used as agents of the Inquisition.

The story of Warhammer 40,000: Darktide has been written by renowned author Dan Abnett, whose credits span fictional universes as diverse as Marvel, DC, Doctor Who, Warhammer/ Warhammer 40,000, 2000 AD, and Tomb Raider. In the gaming space, he was a co-writer on Creative Assembly's Alien: Isolation.

Darktide also includes over 75K voiced lines to keep the party banter fresh depending on the situation, the party composition, the player character's rank within the Inquisition, and other factors.

As mentioned above, the moment-to-moment gameplay will largely resemble that of the Vermintide games. Players will face off against hordes of regular enemies, some Elite enemies, and a few Specials. However, there is one key difference: Warhammer 40,000: Darktide features much greater focus on ranged combat due to the setting. Whereas the two Vermintide titles were almost exclusively about melee combat, Darktide promises to be roughly even split.

Fatshark developers have called this Hybrid Combat. Players will have to learn how to use and when to switch to the most appropriate weapon type. The studio has loosely divided this into Far Combat (relegated to combat rifles), Close Combat (shotguns, submachine guns), and proper Melee Combat (in Warhammer 40,000: Darktide, power swords or a thunder hammer). Confirmed weapons also include a Ripper Gun and at least two different Lasguns. Most weapons will have secondary fire modes.

The mechanics in Warhammer 40,000: Darktide have been updated to account for the increasingly dynamic fights, introducing sprinting, vaulting, advanced recoil, and suppression fire. Additionally, given the importance of ranged combat, Fatshark added a regenerating shield called Toughness that lets players absorb a couple of ranged shots before they are stunned and then killed. Do note that this will only be available while sticking near the rest of the team.

The level design in this game is also different than that of the Vermintide games. Whereas missions and levels were tied together in those titles, Fatshark decided to create levels independently of missions in Warhammer 40,000: Darktide. As such, it will be possible for different missions to take place in the same area.

Another key differentiator from Vermintide is that the four classes (Veteran, Zealot, Ogryn, and Psyker) are not tied to specific heroes. Players will instead create their own characters through a specific character creator system. They'll start with choosing a backstory on how they became convicts: dereliction of duty, insubordination, misplaced faith, or sedition.

Appearance tweaking options include body type, face, eye color, hairstyle, facial hair, face tattoos, body tattoos, scars, height, and personality. Warhammer 40,000: Darktide will also allow for deeper visual customization, as players can mix and match their favorite cosmetic items in the following slots: headgear, upper body, lower body, and accessories. While the game itself is played in first-person view, the social hub where players take up contracts and missions is displayed in third-person camera so that the characters can be displayed in all their customized glory.

Unlike Vermintide, there are no class restrictions at play in this game, so you could pick four Psykers if you wanted to. They can be set up very differently anyway, as leveling up provides players with the choice of one between three perks. The rest of the character progression is a blend of randomized rewards, purchasing weapons through a shop (for in-game currency), or setting up a contract to unlock a weapon of choice. Crafting stations let players salvage unwanted items and use those materials for something more useful.

Warhammer 40,000: Darktide will have an evolving narrative with which Fatshark aims to keep the game as fresh as possible for returning fans. The developers also plan to make quick tweaks to regular missions every now and then, such as blackouts that make areas much darker suddenly requiring the use of flashlights.

Warhammer 40,000: Darktide does include microtransactions through the Aquilas premium currency. Most cosmetic items will be sold through the in-game store for real-world money, while others will be unlocked through in-game milestones such as progressing through the story.

Fatshark also said they are open to adding other types of purchasable content to the game in the future. They pointed to Weapon Packs being popular in Vermintide 2.

Below is a collection of all the official Warhammer 40,000: Darktide trailers published by Fatshark.

The post Warhammer 40,000: Darktide – Everything You Need to Know About Fatshark’s New Game by Alessio Palumbo appeared first on Wccftech.