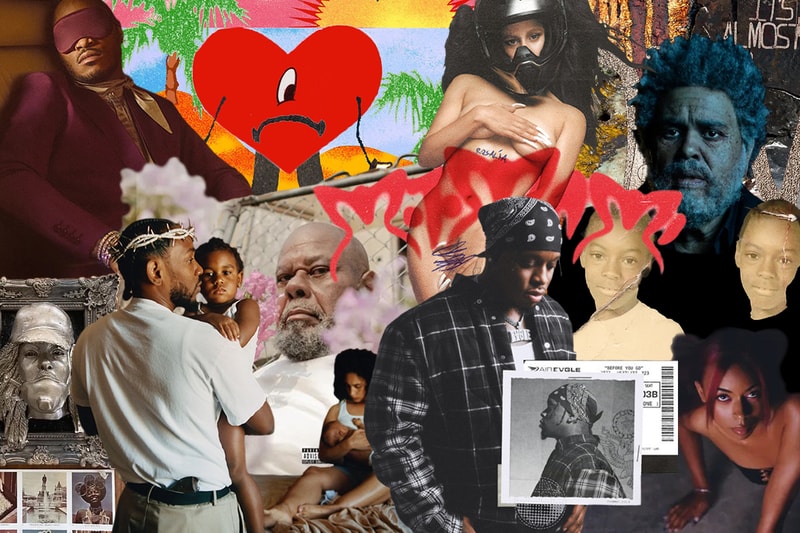 The first half of 2022 proved to be an exciting one for the music industry. In addition the past six to 12 months of short tours and music festivals, fans were treated to album releases from artists who have largely remained under the radar for almost half a decade — Pusha T's It's Almost Dry, Kendrick Lamar's Mr. Morale & the Big Steppers, Saba's Few Good Things, Earl Sweatshirt's SICK! and Rosalía's MOTOMAMI all dropped in a span of six months.

We also had the pleasure of hearing full-length efforts from Bad Bunny with Un Verano Sin Ti, Future with I NEVER LIKED YOU and The Weeknd with Dawn FM, a quick turnaround from Vince Staples who released RAMONA PARK BROKE MY HEART less than a year before its predecessor and debut albums from Blxst and Ravyn Lenae, who have already impressed audiences with Before You Go and HYPNOS.

It's worth noting that although the likes of Drake's HONESTLY, NEVERMIND, GIVĒON's Give or Take and Logic's Vinyl Days were also released before July, HYPEBEAST decided that more time is required to give these albums a good and focused listen.

If anything, the first six months of the year reminds listeners that there will always be an abundance of good music, and that if we are patient enough, there's always a chance for the greats to reappear with refreshing material. Without further ado, HYPEBEAST presents the Best Music Projects of 2022... So Far. In between creating music, winning the WWE 24/7 Championship and a tag team match at WrestleMania 37 and inking deals with Marvel as the first Latin superhero with a solo film, Bad Bunny seems to know how to do it all without letting quality slide. The reggaeton star’s Un Verano Sin Ti sends listeners on a fun, cultural trip to his native of Puerto Rico, but without failing to remind them of struggles and hardships that are constantly overlooked by the general public. With standout cuts like “El Aapagón” — a direct statement about the ongoing political issues on the Carribean island — Bad Bunny ensures that the music he creates will still hold meaning and influence listeners for the greater good, all the while sonically moving them on the dancefloor.

Blxst - Before You Go When asked about Before You Go in a recent interview, Blxst cited a transitional change as his inspiration. Stepping into higher levels as an artist and CEO, the South Central LA rapper-crooner’s journey picks up right where his previous record No Love Lost left off. With a matured outlook on love, gratitude, and success, he is as fastidious as he is versatile by spinning new takes on melodic rapping and old-school R&B. Before You Go has a story to tell and armed with features from Rick Ross, Zacari, Arin Ray, and Grandmaster Vic, Blxst remains steadfast and committed to his creative integrity and sound. Earl Sweatshirt enters, accepts and understands the chaos in SICK!, a 10-track offering exploring themes of isolation and loneliness — a different kind of illness. Throughout the 24 minutes, it’s evident that the Odd Future stalwart was meticulous in the album’s creation; each bar, cadence, the guest verses of Zelooperz and Armand Hammer and production of The Alchemist, Black Noi$e, Ancestor, Theravada, Rob Chamber, Samiyam and Alexander Spit were placed in their perfect positions, making for a well-rounded project that takes a much deeper dive into what many were facing during the height of the pandemic.

Future - I NEVER LIKED YOU Despite being known as a pioneer of trap, Future is an artist that never fails to grow with each project, and his ninth studio album I NEVER LIKED YOU only proves it to be true. Spending a decade in the business has only allowed the artist to further hone his skill as a trailblazer and an icon, but he ensures he never gets left behind or outshined by the myriad of talented rappers popping up from every corner of the industry. I NEVER LIKED YOU places Future in both a zone he’s familiar with and one where he flourishes, and with the support of Drake, Tems, Ye, Gunna, Young Thug, EST Gee and Kodak Black, there’s no reason to doubt his continuous progress. Kendrick Lamar is elusive and contemplative at best. Having shrouded himself from the limelight over the past five years, the Compton icon returned with his most salient of reflections in Mr. Morale & the Big Steppers. The 19-track, 3-disc effort sees K-Dot wrestle with self-discovery, collective trauma, accountability, family ties, and many more layers of vulnerability. Soul-baring confessions and emotional depths come hand in hand with his distinct deliveries, star-studded guest features, and masterful production. As revered as the hip-hop legend is, Kendrick’s latest full-length effort is a humbling reminder that one will always have inner work to do. Pusha T’s It’s Almost Dry was undeniably one of 2022’s most anticipated albums and it definitely didn’t disappoint. The industry-proclaimed “King of Coke Rappers” made his triumphant return after four long years, maintaining the same hunger that earned 2018’s DAYTONA a GRAMMY nod for Best Rap Album but with a more powerful and cut-throat vigor. He further cements his image as both a man and a rapper not to be messed with — as heard on the standout cut “Call My Bluff” — but his ever-evolving skills matched with production from Pharrell and the artist formerly known as Kanye West places him above what is expected of the modern-day rapper. King Push is a menace in every exciting sense of the word, with It’s Almost Dry making a very strong case for Album of the Year. Rayvn Lenae’s extensive repertoire has already set her up for success. Having signed to Atlantic Records at the age of 16, released three EPs by 19, and worked closely with fan favorites such as SZA, KAYTRANADA, Smino, Steve Lacy, and more, the now-23-year-old songstress’ efforts are best solidified in her debut album HYPNOS. Exploring topics such as womanhood, sexuality, vulnerability, and self-doubt, Lenae has forged her own sound with silky R&B vocals, funk-inspired instrumentals, and soulful melodies. HYPNOS is a deep dive of a promising artist who is wise beyond her years and a gentle reminder to keep all eyes on her. Rosalía stated in a recent interview that she’s “the first to the studio and the last to leave,” and with the amount of talent and skill she holds as both a singer and producer, it comes as no surprise that MOTOMAMI appears on this list. The Spanish artist’s creativity knows absolutely no bounds, but her experimentation leads her to nothing but greatness across the 16-track album. Rosalia doesn’t just throw everything on a wall hoping that it sticks; she’s well-aware of which fusions and combinations deliver a brand new experience for her listeners, sending them down a sonic path unheard of before that will also open new doors for other artists looking to stray from traditional sounds. 2022 has dealt a Few Good Things and Saba’s sophomore studio album is one of them. Artists in the modern music industry may struggle to keep fans’ interest after being away for four years, but the Chicago rapper stayed on top of his game, as proven by the multitude of singles he dropped in between the two projects. Each cut proved to be better than its predecessor and the years of experience and skills culminated in Few Good Things — a stunning 14-track project filled with thought provoking penmanship laid atop melodic beats that borrow influences from neo-soul and rap. To put it simply, The Weeknd’s Dawn FM is a polished and multi-layered sonic adventure. Channeled as a radio station, the concept album sees him architect a new turning point for his music into one that explores 80s synthpop grooves and upbeat disco sounds. With each release bringing fans into another world, Dawn FM is fuelled by euphoria and the XO Records artist’s penchant for evolution. Abel keeps listeners on their toes by setting the mood away from the drug-induced haze that defined earlier parts of his artistry, and into one that is both retro and futuristic. Vince Staples has cemented himself in the game as a profound storyteller. Riding the wave of his fifth studio album RAMONA PARK BROKE MY HEART, the Long Beach native goes back to his roots by honoring his neighborhood’s Ramona Park. Beneath the sunny West Coast ambience are deep layers of introspection that see Staples further his lyrical craft. Thick in the throes of violence and death, the rapper eloquently confronts harsh realities from the place he calls home and finds light amidst loss. Growth is no stranger to Staples, as he unapologetically embraces his upbringing and uplifts the community who built him.