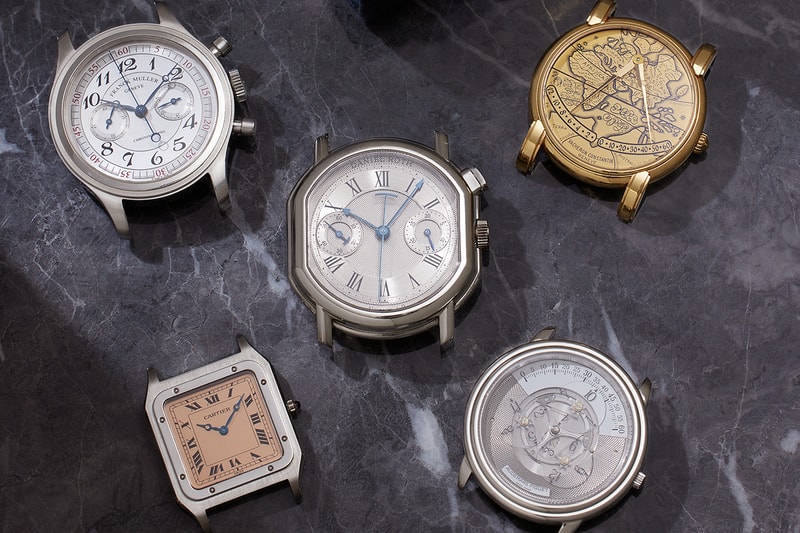 The week-long auction is live now at A Collected Man and closes on June 29. Here HYPEBEAST takes a look at the lots. First up is one of 90 individually numbered Cartier Santos Dumont watches produced in platinum for the design’s 90th anniversary in 1994.

The watch pairs a warm dial that rests somewhere between champagne and salmon - a rarity for Cartier - with the white metal platinum case alongside all of the model’s signature design cues, including black Roman numerals, railway minute track, blued Breguet hands and exposed screw heads. Again from 1994, the Vacheron Constantin Mercator 43050 marked the 400th anniversary of the death of Geradus Mercator, a pioneering geographer and cartographer. During the 10 years that the 36mm watch was available 638 pieces were produced.

The unconventional yellow gold timekeeper displays the time using dual retrograde hands in the form of a compass; hours on the left and minutes on the right. The engraved enamel dial features a map of Europe, Africa and Asia originally drawn by Mercator in the 16th century. Watchmaker Daniel Roth sourced a small number of 1930s Lemania 2220 movements in 1991, refinishing them to the highest standard only two years after establishing his eponymous brand. He made a total of 52 Monopusher Chronographs, 36 in yellow gold cases and 16 in platinum.

The example offered by A Collected Man is one of the platinum examples with a complementary grey gold dial embellished with a mix of decorative guilloche techniques including Clous de Paris. The watch is also individually numbered ‘Numero 8’ inscription at the six o’clock position, with the movement bearing the same number. Proof that modern Audemars Piguet wasn’t always dominated by the Royal Oak, this rare platinum Star Wheel shows the brand’s take on the wandering hours display using three rotating sapphire disks on a rotating carousel that track against a 120-degree minute scale at the top of the dial. In the early days of Franck Muller’s career, he produced a number of mid-century influenced chronographs in stainless steel, this example being a rare prototype not intended for sale.

The restrained two-register chronograph design housed in a 36mm case is the antithesis of the bold, oversized style Muller would later be associated with. The stainless steel three-piece case, with stepped concave bezel is engraved 'prototype' and 'N. 0/0'.

In other watch news, long-standing Audemars Piguet CEO is leaving the brand.