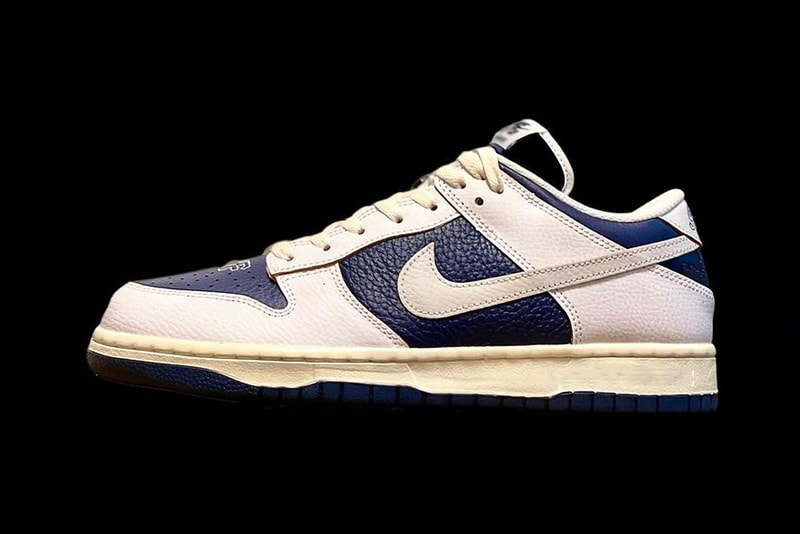 Following rumors regarding the next entry in HUF and Nike SB's collaborative catalog, we are now offered a first look at the HUF x Nike SB Dunk Low. The two are no strangers with a lengthy history that includes classics such as the SB Dunk High Pro "Tie-Dye" which released in 2004. For 2022, HUF celebrates its 20th anniversary and joins Nike in what is expected to be a full capsule including both apparel and the SB Dunk Low.

From the limited angles provided, the pair looks to begin with a leather navy base that carries white leather overlays, including white Swooshes. Matching white laces pairs with an off-white midsole resting atop a navy outsole. Beyond that, collaborative branding and detailing is presented throughout. At the heel, the late Keith Hufnagel, founder of HUF, is paid tribute to with "KEITH FOREVER" text spanning across the two shoes above a New York City skyline that nods to his upbringing. The toebox features "HUF" text that looks to carry metallic silver Swoosh hardware on top, completing the sneaker.

No specific information regarding the collaboration's release has been shared. However, it is expected to be available by the end of the year via Nike and select retailers. Check out the entire first look at the duo's SB Dunk Low below.

In other Nike SB news, the official images of the Why So Sad? x Nike SB Dunk Low have surfaced.