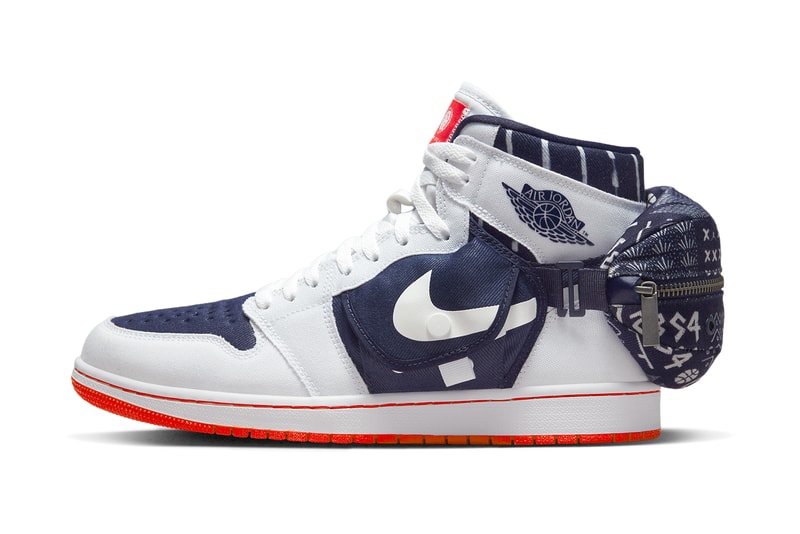 Operating as the world's largest annual street basketball competition, Quai 54 invites top level talent to participate in men's and women's knockout tournaments. This year, the event takes place July 9 and July 10 next to the Eiffel Tower in Paris, France. As part of an ongoing partnership with Jordan Brand, exclusive collaborative apparel and footwear will be available once again in celebration of the event.

While a full apparel line and Air Jordan 7 colorway have been teased, the Swoosh has started off by offering a closer look at the event's Air Jordan 1 Utility Stash. Putting a spin on the classic Air Jordan 1, the silhouette introduces pouches at the Swooshes and heel that adds bulk to the look. This "Quai 54" colorway utilizes canvas on the upper with white overlays resting atop a dark blue base. This color combination runs throughout the upper's detailing while a red tag with collaborative branding and orange sole stitching and outsole complete the look.

Release details are limited, however, with the event taking place July 9 and July 10, a release for the Air Jordan 1 Utility Stash "Quai 54' is expected during the event or shortly after. The retail price is set at $190 USD and will be available via Nike and select retailers.

In case you missed it, an early look at the Air Jordan 5 "Concord" popped up ahead of its August release.