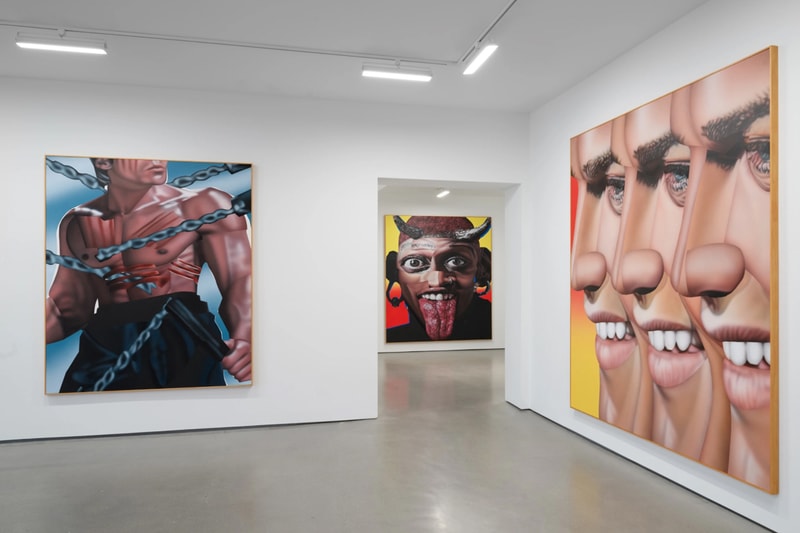 Collage is one way to describe the work of Alic Brock. "Chopped and screwed" is a more accurate term. Based in Atlanta, the artist surveys the internet for images of athletes and pop culture icons to create superimposed human forms that are more in line with mosaics, rather than traditional paintings.

As his first solo exhibition on the West Coast, Brock unveiled Screen Shot over the weekend at Simchowitz Gallery in Los Angeles. adidas tracksuits, Elvis, Dennis Rodman — some of the many widely circulated imagery that Brock reimagines through his signature acrylic and airbrush aesthetic.

“I like to keep in mind how these smaller, collaged shapes make up this greater whole. Like a mosaic, they can be indecipherable up close, but make sense standing across the room.” Each painting emphasizes subtraction more than addition — "removing anything imperfect in this very shallow, methodical way,” he said. “It somehow feels natural for the famous person.”

Growing up in Dayton, Ohio, images of celebrities served as a portal for Brock to enter more enchanting worlds. Having drawn them endlessly as a child, his fragmented compositions are a way for him to "come to grips with images of the past" — many of which have been warped from their original context. Screen Shot is on view at Simchowitz Gallery until June 25.