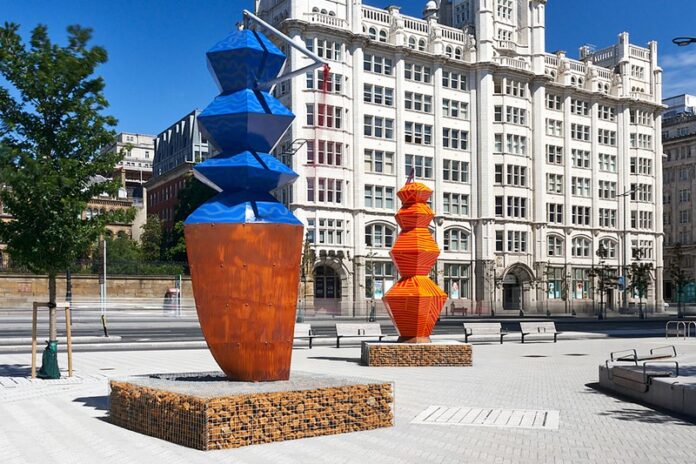 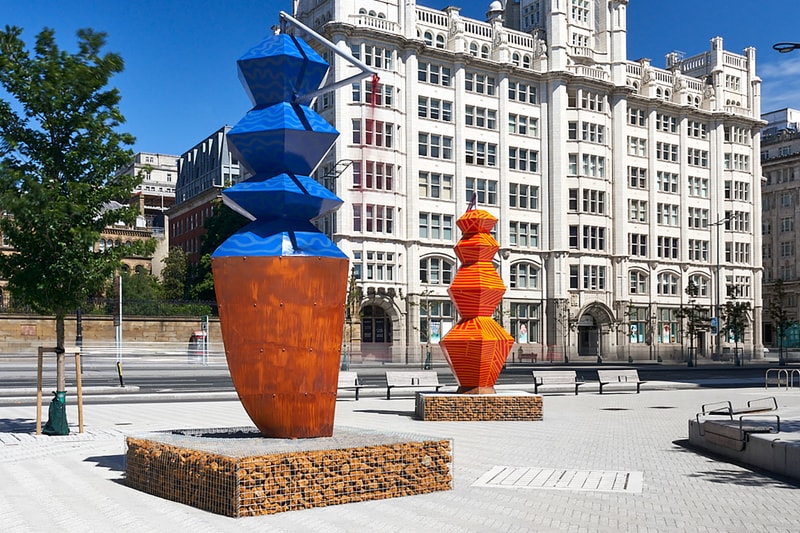 A series of colourful totems have appeared in various spots across Liverpool, and have been designed by artist Alicja Biala as a commentary on the rising water levels in the area due to climate change. The three "Mersyside Totemy" structures stand at 4.5 meters tall and are in-situ at St Nicholas Place on Princes Dock, where they will remain for two years.

Biala, a Polish artist who lives and works in London, wanted to use her work to draw attention to the climate emergency, and the effect it is having in this particular area of Merseyside. The concept behind her series draws heavily on the area's maritime history and sees its influence across the choice of material, colour, and form.

Each totem has been produced locally at the Castle Fine Arts Foundry Liverpool, using materials that nod to traditional shipbuilding. Rusty steel left in its bare state is paired with patterned sections, which have been inspired by the colourful buoys that appear along the Merseyside coastline. The plinths for the totems are based on sea defences, which are also known as gabion baskets and see metal cages filled with stones.

Each totem also features three flags that point to three areas most threatened by the rising sea levels: Liverpool City Centre, Formby and Birkenhead. The flags reference international maritime signals, an alphabet of phrases used by ships around the world to communicate with one another.

In order to engage the public with the message, QR codes are applied at the base of the sculptures and bring up data that represents a view of the area in 2080, if the sea levels continue to rise at the current rate.

"With much of Merseyside set to feel the impact of rising sea levels within the next century, Biala’s work is strongly situated in the context of the local area, presenting important data in a way that can connect with everybody who passes by.

We hope that this new work will serve as a starting point to spark ideas and conversation around what can be done to mitigate the effects of climate change across our region."

In other art news, Ai Wei Wei's "World Without Borders" installation has arrived in Stockholm.