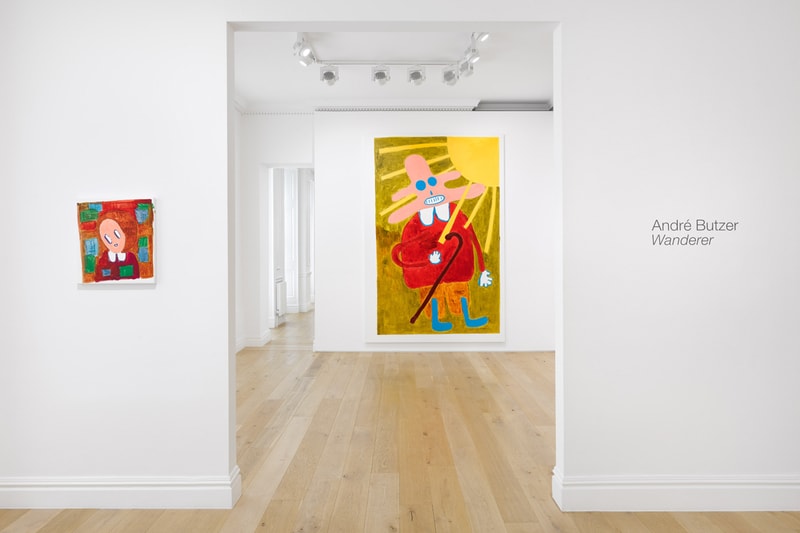 André Butzer was recently immortalized through a detailed new book by TASCHEN which chronicles his three decade career. Still in the mode of creation, the German artist invites you back to his fictional world of NASAHEIM in a new exhibition at Galerie Max Hetzler in London.

The eponymously titled show centers around the figure of the Wanderer — one of the first characters Butzer created, which in a way can be seen as his alter ego. Growing up in Stuttgart, Butzer dreamt of the sunny weather out in Southern California. Upon briefly realizing that dream in 2001, he realized that it did not quite live up to his expectations, leaving him to endlessly chase for a promise land that is 'neither here, nor there.'

This character arc is shown within the series of paintings on view. In several, you can see the Wanderer blinded by the sun with its guts spilling out. However, the most recent compositions show a transition back to the forest and water that is ever-present across Germany, indicating that the artist has a newfound appreciation for home.

In the past, Butzer has described his mark as “Science Fiction-Expressionism" — carrying inspiration from comic books and folk art, Henri Matisse and Walt Disney, to Friedrich Hölderlin and Henry Ford. Catch Wanderer as its on view at Galerie Max Hetzler London until July 30.

In other art-related news, Tom Sachs is presenting three concurrent exhibitions in Korea.

Share
Facebook
Twitter
Pinterest
WhatsApp
Previous articleGet An On-Feet Look At The Why So Sad? x Nike SB Dunk Low
Next articleUbisoft and Other Quebec Game Studios May Feel the Pinch from New French Language Laws