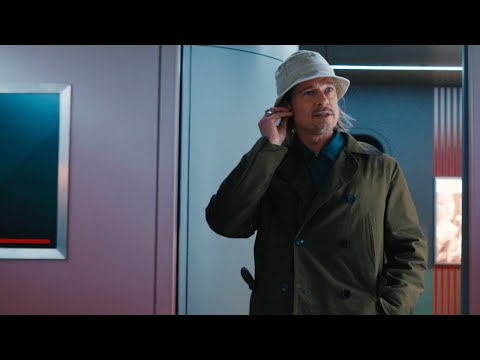 The latest trailer for Brad Pitt's Bullet Train has officially been released.

Fans receive a teaser and new footage of Aaron Taylor Johnson's Tangerine, who starts watching the film on his phone. Brian Tyree Henry's Lemon appears to take offense to the situation stating that there is "no surround sound" on the phone. Lemon promptly states, "Watching the movie in the theater is a better experience." Lemon seems to understand and switches to listening to music instead. After that, recycled scenes of Brad Pitt's Ladybug and Bad Bunny's The Wolf fighting are used before the trailer prompts fans to watch Bullet Train in IMAX.

The star-studded cast also features Joey King, Michael Shannon, Sandra Bullock, and more. The plot follows Pitt's character, who is a trained assassin hoping to leave his life in the past. However, he is tasked with bringing a briefcase on the bullet train from Tokyo to Kyoto and on this journey, an entire adventure unfolds throughout the mission.

Bullet Train arrives in theaters on August 5. Watch the trailer above.

Elsewhere in entertainment, take a look at the first official poster for Christopher Nolan's Oppenheimer.