Craig Green’s SS23 adidas Collaboration is a Lesson in Restraint 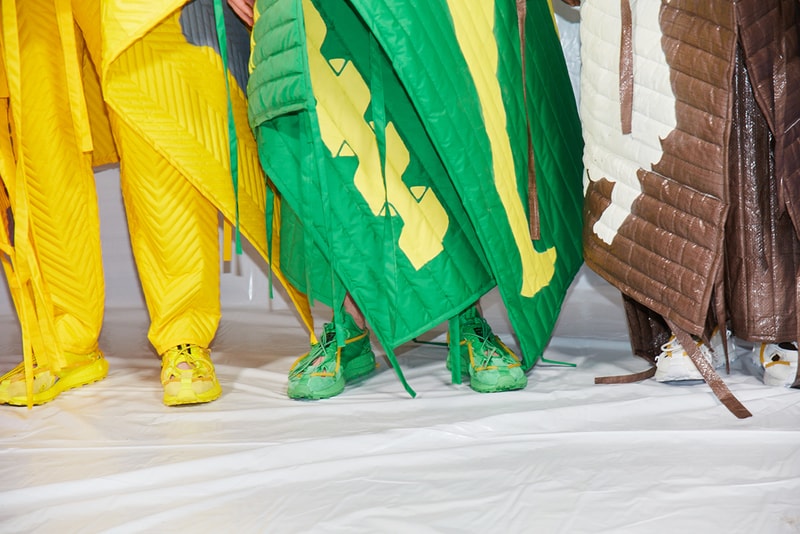 As Craig Green’s collaboration with adidas enters its seventh season, their work together is going from strength to strength. The latest collaboration, which was unveiled as part of Green’s Spring/Summer 2023 show in Paris, focused on the Stan Smith and Retropy silhouettes, incorporating themes of uniform, protection and masculinity that regularly feature in Green’s work.

“A lot of the ideas in the collection always relate back to protection, but this season was a different type of protective theme,” Green tells HYPEBEAST after the show. “The beginning of the collection came from an image we found of the most decorated man in the Guinness Book of World Records? The term “decorated man” itself has an interesting double meaning, because usually you decorate something to make it look better. We were thinking about things you aspire to be, as you get older the man you think you’re going to be and the things you think you’re going to get. That links back to protection in a conceptual way, you’re protected by the things that you gain as you get older.”

The collection, and with it this season’s adidas collaboration, was also influenced by the show’s setting, the Musée de L’Homme. “It’s an anthropological museum exploring different ideas of masculinity and men,” Green continues. “That idea really links to what we were exploring in the collection, and it helped to inform it. Those ideas also link back into the shoes as well, in the way that they were constructed and the materials that were used.”

"Sometimes when you have too many options it hinders the creative process."

For the collection’s footwear, Green revisited arguably adidas’ best known silhouette, taking the Stan Smith and twisting it in a number of different directions. “It’s one of the iconic shapes of adidas, and we always try and use icons in our collection,” Green adds. “This season we looked at the suit as a garment icon, and so it felt right to use something iconic from adidas and twist it in the same way that we were twisting the suit: taking something traditional or iconic and challenging what it could be.”

The Stan Smith arrives in a number of constructions, including the Stan Smith BOOST – complete with an upper constructed entirely from BOOST – as well as the “Split Stan” and “Flat Stan” sandal. For the "Split Stan," Green sliced the leather upper in half and inserted a rubber protusion between the segments, while the "Flat Stan" concept sandal takes its name from its fully-collapsible design achieved by its construction from a single sheet of EVA foam.

Similarly, the Retropy was given a BOOST-focused rework, with the technology used for the whole of the running-inspired silhouette, and reworked into a sandal featuring a neoprene upper, cut out panels, a BOOST midsole, embroidered stripes and roped lacing system. The SS23 footwear is finished with the CG Concept Shoe, which takes a different approach with a fully dissasembled construction, velcro straps and a rubber outsole.

“Previously we’ve worked with multiple adidas shoes in one show, but it felt right to keep it a bit more focused this season and work within restrictions,” Green continues. “If you just have the Stan Smith, what can you do with it? Working within restrictions is such an interesting way to work. Sometimes when you have too many options it hinders the creative process.” As well as the wearable adaptations of the Stan Smith and Retropy, both silhouettes also arrived in more conceptual designs. This approach also referenced Green’s wider collection, and the way in which it was shown. “In the same way that we build the collections, the sculptural element is so important,” he says. “We always have a more conceptual and sculptural side to the collections, but we offset that with something very approachable and understandable. The sculptures are more interesting because there’s something approachable with them, and the clothing is more interesting because there’s something sculptural with it. Playing between those two extremes is always really important in how we develop the collections and it's the same with the footwear. You have to have the storytelling aspect to understand the approachable, and the approachable to understand the storytelling aspect.”

This approach is also the cornerstone of Green’s work with adidas, which has been ongoing for more than three years. “They encourage that experimentation and allow us to do extreme things as well as develop product that people can access,” he says. As the partnership continues to evolve, the last three years of experimentation and collaboration serve as a solid foundation.

“Over a period of time, the relationship only gets stronger because you learn how to work with each other in the best possible way,” Green concludes. “After all these seasons we know each other very well and we know we can work in a way that allows for ideas to be pushed further and further. The relationship has solidified and we understand the way we both like to work, and we understand how to balance the two aesthetics in the best way.”