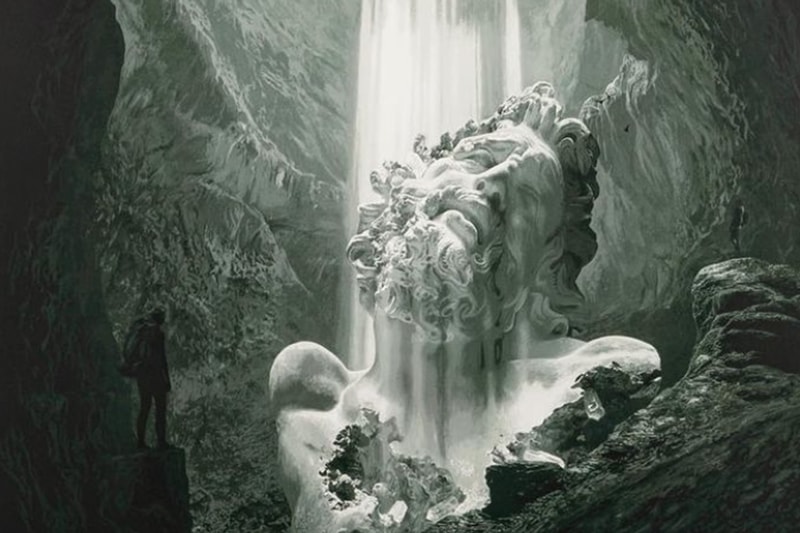 Fresh off winning the Fuorisalone Prize for his “Divided Layers” installation in Milan, Daniel Arsham returns to the world of prints in a new release titled GROTTO OF LAOCOÖN. The artwork references a painting of the same name from Arsham's "UNEARTHED" exhibition in Berlin, where KÖNIG GALERIE was transformed into a hall of antiquities.

Made in conjunction with the revered Brand X Editions in New York City, GROTTO OF LAOCOÖN casts the viewer a 1,000 years in the future, where humans traverse a massive cavern filled with long-forgotten treasures, such as a crumbling sculpture of the Greek seer, Laocoön. Emblematic of his most recent studies, Arsham places both treasured and pop cultural references — from Greco-Roman statues to Pokémon characters — in fictionalized time periods, where humans are left with riddles of the communities that once inhabited this world and the objects that they placed their faith into.

GROTTO OF LAOCOÖN is made using 26 individual silkscreens and printed on 48" x 57" archival cotton paper. Limited to an edition of 199, the artwork comes signed and numbered by the artist in a neatly wrapped Arsham Studio-designed linen and silver embossed packaging, along with a holographic seal of authenticity on the included COA card. The print will release this Friday, June 24 at 12pm ET at the artist's webshop.