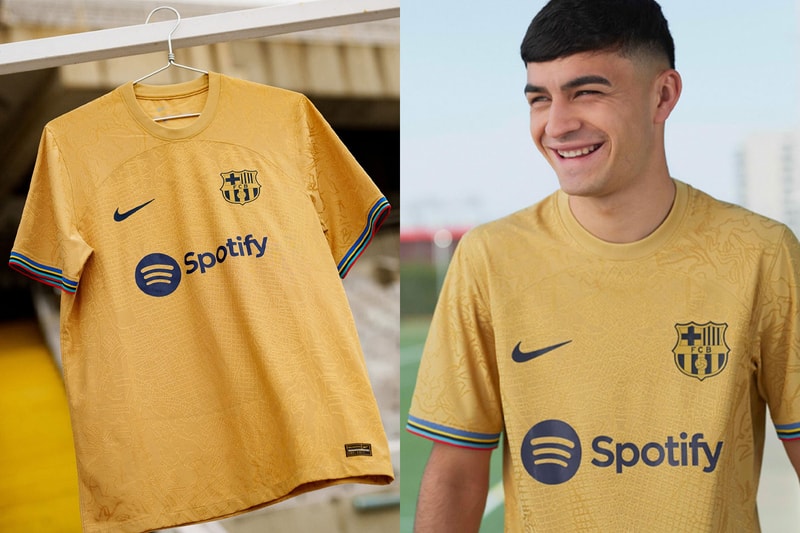 After revealing a new home kit inspired by the 1992 Olympics earlier this month, the Spanish football club FC Barcelona has now released its away kits for the upcoming 2022/23 season. The away jersey also takes inspiration from the Olympics, dressed in gold with a pattern displaying the map of Barcelona highlighting Eixample, Montjuic, and Barceloneta where the 1992 Games were held.

Sleeve cuffs feature the five colors of the Olympics, and the sponsors' logos — Nike and Spotify — are featured in navy blue. Additional details include the name of the United Nations agency for refugees (UNHCR) printed on the back and players' names and numbers displayed in the same shades of blue.

The golden hues symbolize the winning values of the football club such as tenacity, ambition, effort, and the constant quest for self-improvement, embodied by Barça legend Albert Ferrer who topped the podium at the Barcelona ‘92 ​​Games as well as the FC Barcelona women's football team who won a historic treble including their first-ever UEFA Champions League title in the last two seasons. Continuing their commitment to sustainability, the jerseys are made of 100% recycled polyester fabric produced from recycled plastic bottles.

"Like the home kit, this away strip is also being presented under the tagline ‘The Flame Lives On’, evoking the way that the Olympic spirit that drove the city of Barcelona into a new era is still burning and a part of the everyday lives of men and women in the Catalan capital," FC Barcelona writes on its website. "The Olympic influence made Barcelona a benchmark for the world. In similar fashion, FC Barcelona has always been a benchmark both on and off the pitch, its unique qualities leading it to be recognized as ‘More than a Club’ both at home and abroad."

FC Barcelona's away kit is now available at the Barca Stores at Camp Nou, select locations in Barcelona, and online with a wider release set for later this year.

Elsewhere, Jon Jones is ready to return to the UFC says Dana White.