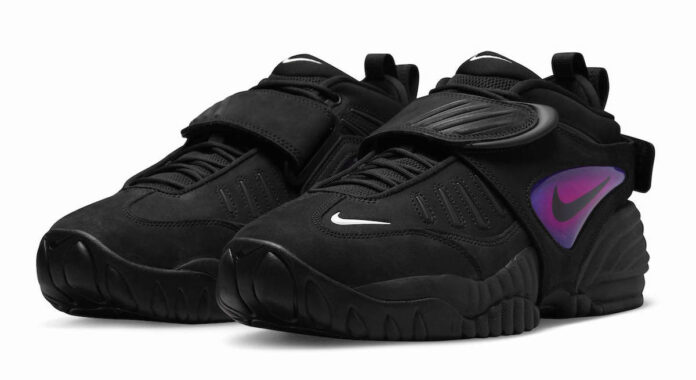 Another AMBUSH x Nike collab is on the way. Making its debut later on this year, here is a first look at the AMBUSH x Nike Air Adjust Force.

The Nike Air Adjust Force is a Nike basketball sneaker that made it debut back in the ’90s. For this 2022 collab with Yoon Ahn’s AMBUSH brand, the ’90s silhouette is redesigned with Nike Grind rubber utilized on the outsole. As far as the rest of the sneaker goes, up top you will find a Black upper contrasted by the White Swooshes. Another notable feature is the removable shroud at the midfoot equipped with Purple and Pink accents on the side panels. Elsewhere you will find a Black rubber outsole housing a large White Swoosh.

In Jordan Brand news, is the upcoming Air Jordan 1 High OG Taxi worthy of a double up?

UPDATE (8/4):  Nike has confirmed that the AMBUSH x Nike Air Adjust Force Black will be releasing on August 19th via SNKRS for the retail price of $210. Nike says “Yoon Ahn hits refresh on the clandestine hoops shoe you’ve longed to see back on the streets. From rich, full-grain leather to co-branded details that add currency to your step, the Air Adjust Force x AMBUSH® lets you dance the line between off-court style and runway flair. We kept the removable midfoot strap that made this look a legend—you can even mix and match to give your ‘fit extra allure—and the Black and Psychic Purple colorway is sure to bring the ‘drop’ wherever you go.”

UPDATE (7/12): Get an official look at the AMBUSH x Nike Air Adjust Force in the Black and Purple colorway.