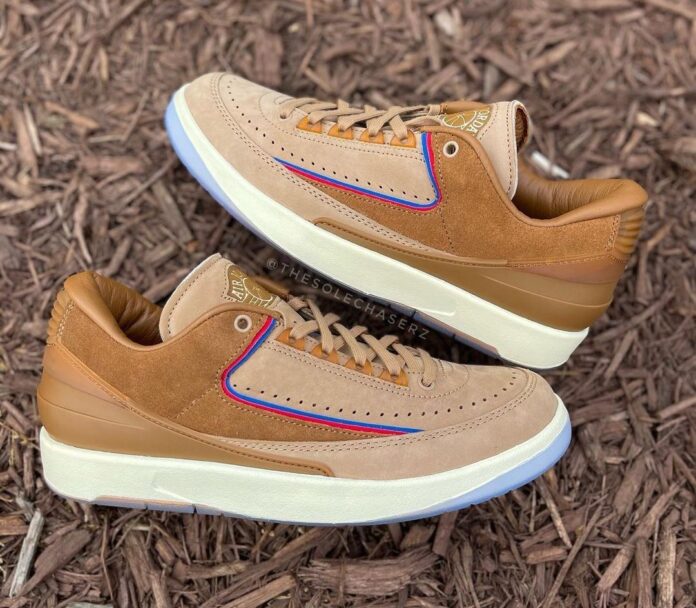 Ever heard of Two 18? Two 18 happens to be one of Detroit’s newest sneaker boutiques while also being the sister store to Burn Rubber. Although they’re the new kids on the block, they’re already going to be teaming up with Jordan Brand to drop an Air Jordan 2 Low collaboration! Talk about not wasting any time!

Previewed below, our first look at the Two 18 x Air Jordan 2 Low shows that it comes dressed in a Rocky Tan, British Tan, Gym Red, and Team Royal color scheme. Choosing the semi-tonal route, varying shades of Brown adorn the upper that comes constructed in a mix of nubuck, suede, and leather. A Sail midsole and translucent outsole is also in play. Collab detailing includes the Two 18 branding, a special hangtag and custom packaging. Although these aren’t the best “leaks” of the sneaker, it gives you a good idea of what to expect.

In other news, the Air Jordan 5 Concord will be making its debut tomorrow.

UPDATE (8/1): Here’s a look at new detailed images of the upcoming Two 18 x Air Jordan 2 Low via thesolechaserz which shows you new details on the laces, inner tongues, and insoles, along with translucent gradient outsoles.

UPDATE (7/6): masterchefian and sneakerknockerzllc give us a better look at the Two 18 x Air Jordan 2 Low. New images reveal graphic insoles displaying a map of Detroit/Michigan.

UPDATE (7/5/): Sneaker63official gives us our best look yet at the Two 18 x Air Jordan 2 Low collaboration. The detailed images confirm that Jordan Brand and the Detroit sneaker boutique were definitely aiming for a premium look and feel. New images show the premium suede used on the upper and the premium leather found on the lining.