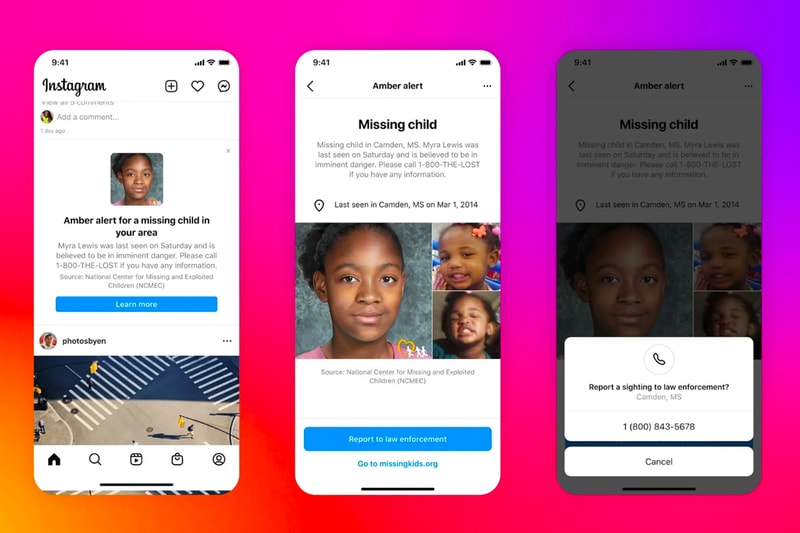 Instagram is including AMBER alerts on users' feeds to allow people to see and share missing children notices in their area.

The new feature will be released within this week and will be rolling out in 25 different countries: Argentina, Australia, Belgium, Bulgaria, Canada, Ecuador, Greece, Guatemala, Ireland, Jamaica, Korea, Lithuania, Luxembourg, Malaysia, Malta, Mexico, the Netherlands, New Zealand, Romania, South Africa, Taiwan, Ukraine, the UK, the United Arab Emirates and the US. Users will be shown details about the abducted child such as their photos, description, location of the abduction and any information which may help better the chances of locating the missing child.

The platform confirmed that it has partnered up with organizations such as the National Center for Missing & Exploited Children (NCMEC) in the US, the International Centre for Missing & Exploited Children, the National Crime Agency in the UK, the Attorney General’s Office in Mexico, the Australian Federal Police and more for this feature. In an official statement, Instagram commented:

"We know that the chances of finding a missing child increase when more people are on the lookout, especially in the first few hours. With this update, if an AMBER Alert is activated by law enforcement and you are in the designated search area, the alert will now appear in your Instagram feed."

The AMBER alerts will be location-specific and will be based on the information on the user's profile, IP address and location services if turned on.