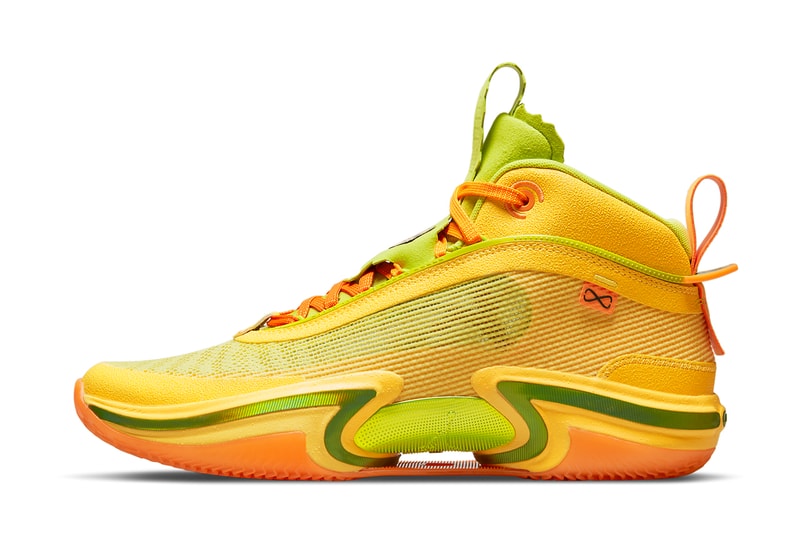 While NBA star Jayson Tatum is locked in on his Finals series against the Golden State Warriors, another colorway in his Jordan Brand portfolio is on its way. The Celtics' franchise player shared last year that his own signature shoe is being cooked up and continues to add his own flair to newer Jordan Brand silhouettes such as the Air Jordan 34 and Air Jordan 35. Now, he brings back his "Taco Jay" theme previously found on an Air Jordan 34 PE in 2020 and shares it with the Air Jordan 36.

Inspired by Tatum's love for tacos as a post-game family meal, this flavorful pair stands out boldly in both theme and color scheme. Referencing various taco ingredients, the Air Jordan 36 runs wild with shades of orange and green throughout. The theme's mascot, a stern looking taco with a Swoosh on its head, makes its return prominently resting atop the lacing system. Further details include "TACO" and "JAY" on the left and right shoes respectively, custom thematic insoles and special packaging.

This time around the "Taco Jay" theme will find itself available to the general public. Releasing on June 17 via Nike and select retailers, it will be priced at $195 USD.

In other footwear news, Jordan Brand and Paris Saint-Germain F.C. have reunited with a France-inspired Air Jordan 5 Low.