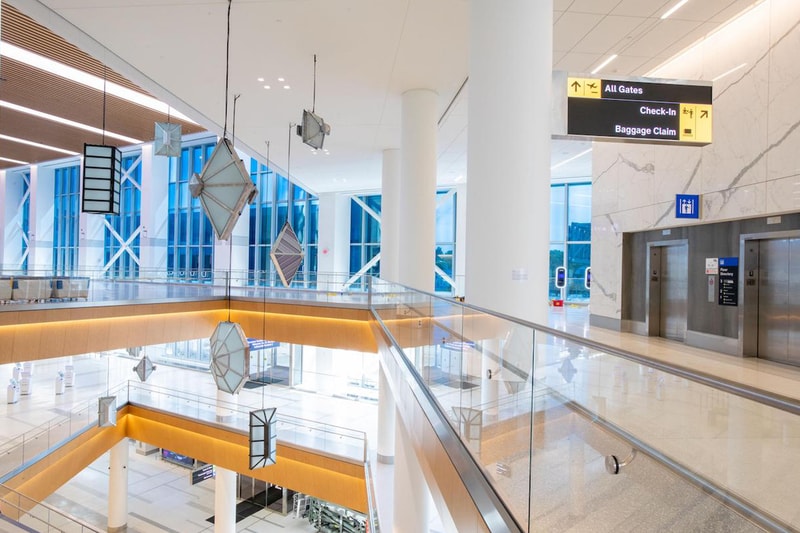 There are very few places on Earth that muster the wide range of emotions found at the airport. Excitement, dread, curiosity, panic — we've all had our experiences. Where some terminals benefit from state-of-the-art designs from the world's leading architects, others fall decrepitly out of favor as underfunding takes its toll.

Tomorrow, June 4, Delta Air Lines’ Terminal C will finally open to the public at New York's less favorable LaGuardia Airport. The $4b USD project will boast nine spacious gates, its own security checkpoint, along with a host of amenities meant to make for a more comfortable passenger experience.

"All these works are very rooted in what it means to live in New York."

As part of Delta's efforts, the airline worked with the Queens Museum and the Port Authority of New York and New Jersey on a $12m USD art initiative that features permanent large-scale installations by Mariam Ghani, Rashid Johnson, Aliza Nisenbaum, Virginia Overton, Ronny Quevedo, and Fred Wilson. All based in New York, each artist presents their own reinterpretation of the city's melting pot of cultures.

"All these works are very rooted in what it means to live in New York,” said the Queens Museum president and executive director, Sally Tallant, in an interview with The New York Times. Amongst the work on view, Johnson installed a massive 45 foot tall and 15 feet wide mosaic that alludes to the aforementioned flurry in emotions found at the airport.

“Travel is such an interesting and complicated and beautiful and frustrating event, whether you think of it for the purpose of bettering oneself or the substantial refugee crisis right now,” Johnson told the New York Times.

Similarly in scale, Quevedo reimagines NYC's love of sports through a large wooden court with the boundary lines mashed up in a constellation of colors.

No matter how pretty a terminal can look, there will always be something to give you a headache. Luckily, LaGuardia got a much needed refresh that will surely complement the experience.

On the opposite coast, Frieze LA will head to the Santa Monica Airport starting in 2023.