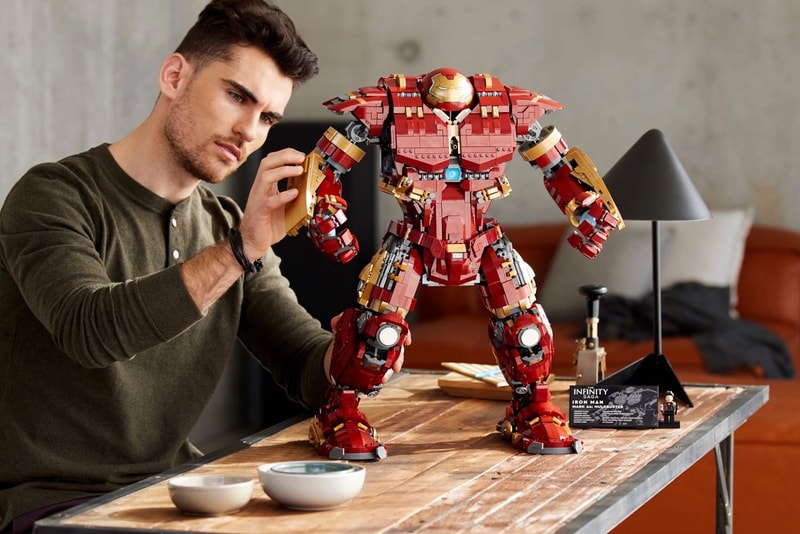 In recent years, LEGO has continued to push its limits as bigger, more ambitious sets release. Recently, sets like the 6,187 piece LEGO Star Wars UCS Razor Crest launched as this year's most expensive set. Now, following several major releases earlier in the year, including a bust of King T'Challa, LEGO Marvel has revealed yet another massive kit, a 4,049 piece Hulkbuster.

LEGO Marvel has created the Hulkbuster before, however, never in such a large size. The set stands 21 inches tall and is packed with features. Light bricks are utilized to create light-up arc reactors in the hands and chest. In addition, new LEGO elements including gold and glow in the dark bricks make their first appearance. A fully jointed upper body provides flexibility in display and play while the interior fits the LEGO Marvel Iron Man Figure, set 76206. Lastly, the set is accompanied by a stand that breaks down the Hulkbuster's specifications alongside a Tony Stark minifigure that features him in the Mark 43 suit.

The LEGO Marvel Hulkbuster set is ready for launch with it landing at a $550 USD price point via LEGO on November 9. For LEGO VIP members, VIP early access is scheduled for November 4.

For more in the world of toys, Mattel Creations has revealed a collaborative project with the late Virgil Abloh featuring Masters of the Universe "TOYS."