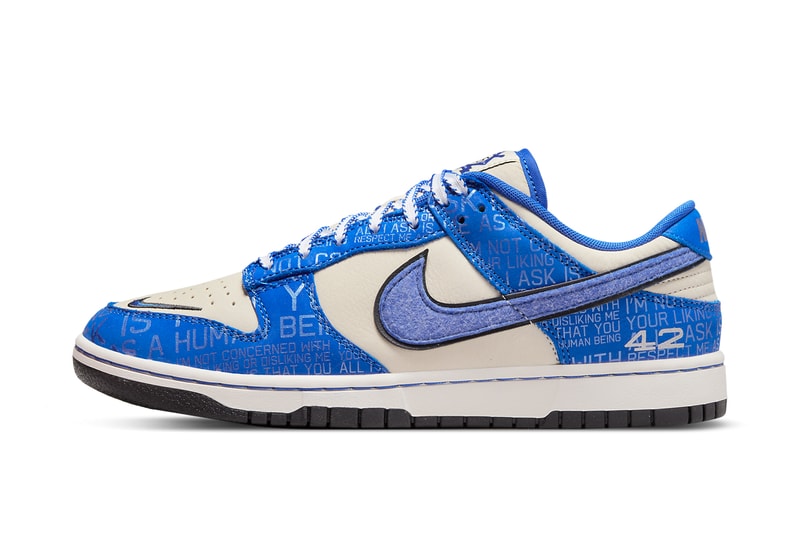 In 1947, Jackie Robinson broke barriers by becoming the first African American to play in a Major League Baseball game in the modern era. Robinson's action was the first step in effectively ending racial segregation in the sport. Commemorating the 75th anniversary of this, longtime partner of the Jackie Robinson Foundation, Nike, is releasing a "Jackie Robinson" Dunk Low colorway.

Originally thought to release on Jackie Robinson Day, the Dunk Low "Jackie Robinson" is finally on its way. Its upper utilizes a color palette drawn from an aged version of Robinson's original uniform, including an off-white base layer and blue overlays and Swooshes. Robinson's iconic 1947 quote “I’m not concerned with your liking or disliking me...All I ask is that you respect me as a human being," is included on the overlays and sockliner. Additional celebratory detailing lands on the tongue, heel, and the baseball stitched laces. To complete the look, a white midsole with blue stitching rests atop a black outsole.

Nike and select retailers are set to release the Dunk Low "Jackie Robinson" on July 19 at a price of $130 USD.

In other footwear news, a Los Angeles Dodgers-inspired colorway of the SB Dunk Low is on its way.