HomeFootwearOfficial Look at the Why So Sad? x Nike SB Dunk Low
FootwearStyle 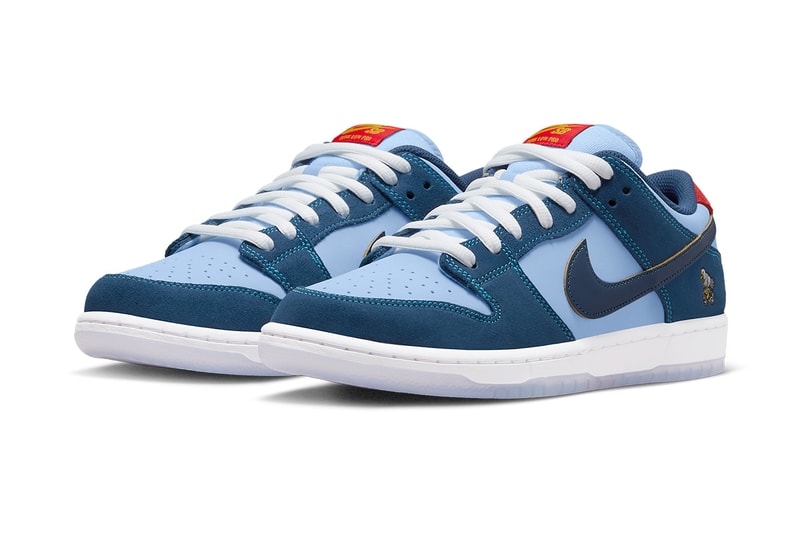 Mental health has been a topic of conversation amongst many athletes in recent years, and one person that has been leading the charge is pro-skater John Rattay. He's responsible for starting up his own fundraising initiative titled “Why So Sad?" to spread awareness around its importance, and this season, Nike and its Nike SB label have elected to show support by supplying him with his own sneaker collaboration. Together, the two parties have engineered with an SB Dunk Low installment, and it has finally been officially unveiled.

The most significant design element of the kicks is The Predatory Bird — one of Rattay's signature icons from his assemblage of writings that has appeared on his previous merchandise releases. The fowl figure is shown cruising on a bicycle on the lateral heel areas and riding a skateboard on the insoles of the right shoe. The SB team swaps out the standard Nike heel branding with question marks and places "Why So Sad?" text hits on the interior sides of the tongues. Various shades of blue spruce up the upper panels, while accents of orange are located on the tongues and heels. Additionally, the Swooshes initially appear with a dark navy shade, but they have wear-away capabilities that reveal a yellow layer underneath to likely represent how a person can often hide their mental health.

Check out a detailed look at the pair above while you wait on their official launch.

For other news, an Arizona Sun Devils-inspired Dunk Low colorway has been revealed.