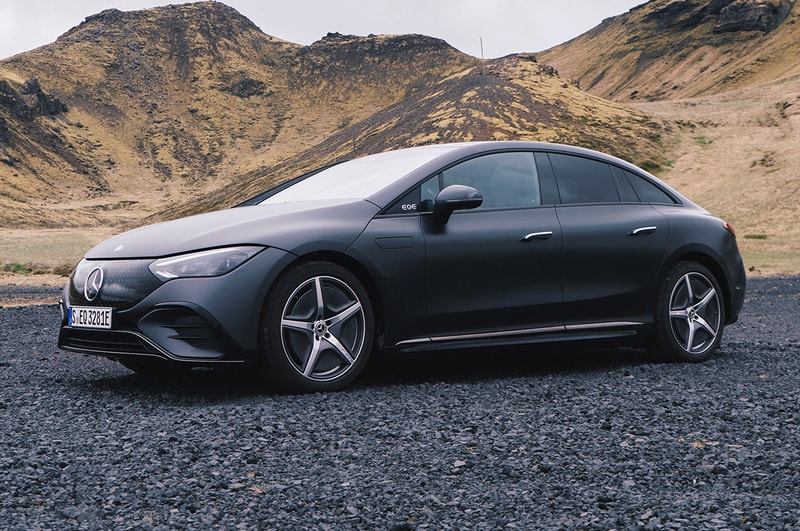 Mercedes-Benz has cracked the electric car code. With the EQA, EQB, EQC, EQS, and EQV under its belt, the German marque now introduces the EQE – the E-Class of the range, following the EQS as its electrified S-Class. Like its bigger brother, the EQE looks – and sounds – like it has arrived from the future, proving again that Mercedes-Benz has its finger on the EV pulse for the long run as it continues to make electric cars that are strong enough to convert any self-confessed petrol head.

Traditional motorists live in a time of hardship – petrol prices are rising, electric charging infrastructures are developing, and EVs are becoming the sensible option for anyone looking to carry four people and plenty of luggage in comfort and style with an abundance of power at the ready.

The Mercedes-Benz EQE manages all of this, and for that, it is not special. This car is exactly what HYPEBEAST’s team thought it would be: aerodynamic exterior, slick contemporary interior, quiet, fast, and well-made. Yet for something that may seem predictable, the EQE managed to throw in a few surprises as we toured the dramatic landscapes of Iceland. Take the exterior of the “MANUFAKTUR Graphite Grey Magno” Mercedes-Benz EQE 500, our fleet’s flagship model. Its AMG-Line finish, complete with an equally performance-derived interior, sat against the stark backdrop of Iceland like a piece of brutalist architecture, turning the heads of passers-by in their ice-tackling, glacier-dominating monster truck-spec off-roaders.

As for the interior, Mercedes-Benz offers a portrait screen taken from the S-Class or the full 56-inch “Hyperscreen” from the EQS. Either way, the EQE’s interior tech also includes a road-filling heads-up display in crystal clear resolution, as well as digital dials in front of the driver, and plenty of buttons on the steering wheel for you to play with. It’s as much of a head-turner inside as it is outside, especially with the “Hyperscreen'' option ticked, which spans the entirety of the cabin giving you and your front passenger control of heated massaging seats, games, 360-degree camera views, interactive maps, and much more. Despite all of this, it’s nothing surprising or new from Mercedes-Benz. It’s packaged in the EQE, an electric car for all the family. And perhaps thinking of the EQE as something exciting or revolutionary misses the mark, because instead, it’s about evolution.

What we’re looking at here is the evolution of the consumer. How do you take your average Mercedes-Benz customer, who has driven a C-Class or E-Class for 15 years that’s seen their family and lifestyle develop and grow, and give them an electric car?

For Mercedes-Benz, it’s about offering something familiar to its clientele. When electric cars first launched en masse, there were fears around range anxiety and the initial costs – nowadays, the EQE will launch with estimated starting costs between $70,000 USD and $80,000 USD, while a similar combustion engine car like the E-Class of a comparable spec will also cost $70,000 USD. Combine that with the 394 miles of range you can get from the EQE on a single charge, and the EV alternative starts to make sense in the real world. Things get more appealing when you start to drive the EQE. Most Mercedes-Benz models are dynamically the same, offering ample amounts of wafty comfort alongside featherlight steering and adequate levels of performance, but the EQE seems to dial this up to eleven. Power is instantaneous, especially in the 500 spec which has four-wheel-drive, 408 BHP and a 133 MPH top speed – more than enough for the daily commuter.

Elsewhere, optional soundtracks including “Vivid Flux,” “Silver Waves” and “Roaring Pulse” are akin to a Star Wars Pod Racer, emulating the sound of an engine where there isn’t one. Paddle shifters behind the wheel encourage a sporty V8-inspired drive, one Mercedes-Benz has become renowned for, but here they shift between the energy regeneration levels.

Overall, the Mercedes-Benz EQE is the electric car that will convince the German marque’s fanbase that there is more to an EV than just eco-friendliness. It’s an all-rounder, fit for today and guaranteed to serve as your chariot for the future, capable of transporting you across cities or, like us, across the diverse terrains of Iceland and further afield.