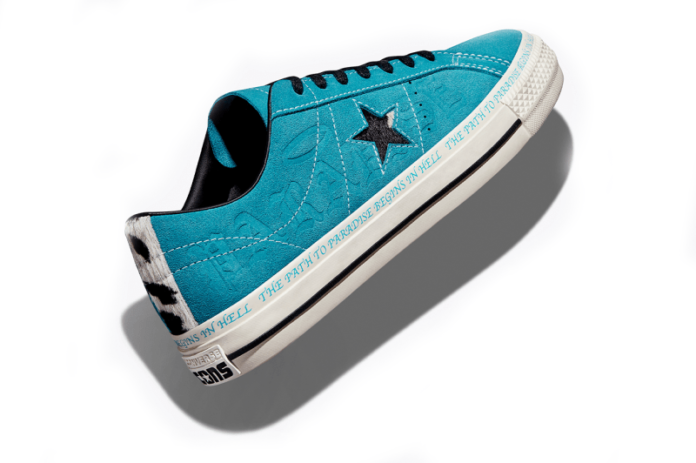 As an OG Supreme skater, Converse CONS teammate and founder of streetwear label Paradis3, Sean Pablo is at the root of the California skate scene. Following his debut collaboration with Converse on the One Star Pro that launched in 2021, the pro rider is now back again for a second take.

Setting his unmistakable touch on the silhouette once more, Pablo draws inspiration from '90s art-house noir and his distinctive personal style dabbed with a bit of cinematic aptitude. The skater pays homage to his SoCal home, taking notes from LA graffiti for the shoe's decor.

The uppers have been drenched in vibrant teal blue suede and debossed with haloed "PARADISE" lettering at the medials. Reflective silver Converse star logos lay atop, while liners are injected with CX foam and completed with a rubber finish for increased durability while on the move. Further details include cartoon tongue graphics, faux cow hair heel strips and inscribed midsoles that repeatedly read "THE PATH TO PARADISE BEGINS IN HELL." Much like his previous release, Sean Pablo decorates the insoles with his most beloved photographic artwork. The design is brought to a close with gum rubber bottoms equipped with a custom Converse CONS traction pattern for boosted fit, grip and function while in motion.

If you're looking to crop, the Sean Pablo x Converse One Star Pro is available now on the Converse webstore and at select retailers for $75 USD.

In other footwear news, take a first look at the adidas YEEZY BOOST 350 V2 "MX Grey."