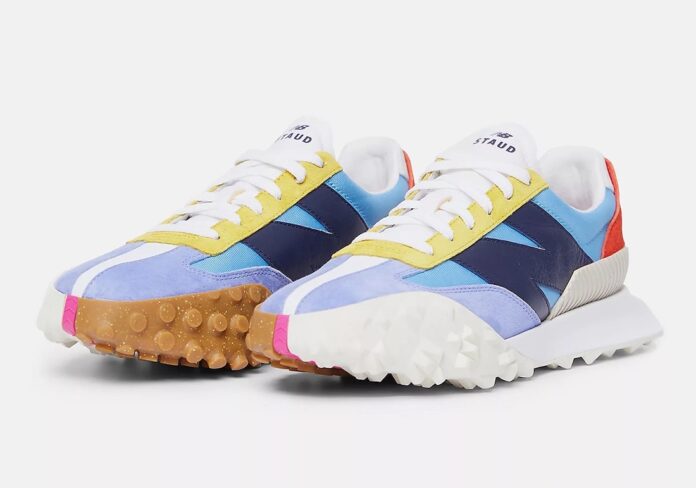 To complete the New Balance x STAUD collaborations, the duo will launch their fifth collection later this month. Celebrating STAUD’s natural tie to Southern California, the collection is inspired by the 80’s and 90’s surf scene.
Following the collections that have previously linked up to court sports like tennis and boxing, for this collection, STAUD and New Balance riffed on STAUD’s SoCal roots mixed with effortless beach lifestyle and sportswear. The collection is infused with a modern color palette and unique design details that bring a fresh perspective to the heritage inspired surf culture.

“For one of my first trips post-quarantine, I went to Costa Rica and absolutely fell in love with surfing. From the athleticism to the culture that surrounds the sport, it was a natural fit for the theme of this new collection. We accentuated the vintage Southern California surf scene from the late 80’s and early 90’s, but with fresh details that bring more functionality to the pieces. The bright reds and pinks that emphasize our signature colorways are mixed with baby blues and bold logos for that heritage feeling,” says STAUD co- founder and creative director Sarah “Staud” Staudinger.

This new drop features a wide range of apparel as well as two new colorways of the genderless New Balance XC-72 in all white with black laces and a multi-color modern colorway including sky blue, lavender, navy, yellow and pops of red orange.

Both colorways of the STAUD x New Balance XC-72 will be releasing globally on July 21, 2022, on Staud.Clothing and on NewBalance.com for a suggested retail pricing of $150 each.

In Yeezy news, the adidas Yeezy Boost 700 Hi-Res Blue is slated to drop later on this year.

UPDATE(7/15): Check out official images of both colorways of the STAUD x New Balance XC-72 Collection . It has been confirmed that both colorways will be releasing on on July 21st a select retailers and NewBalance.com for the retail price of $150.