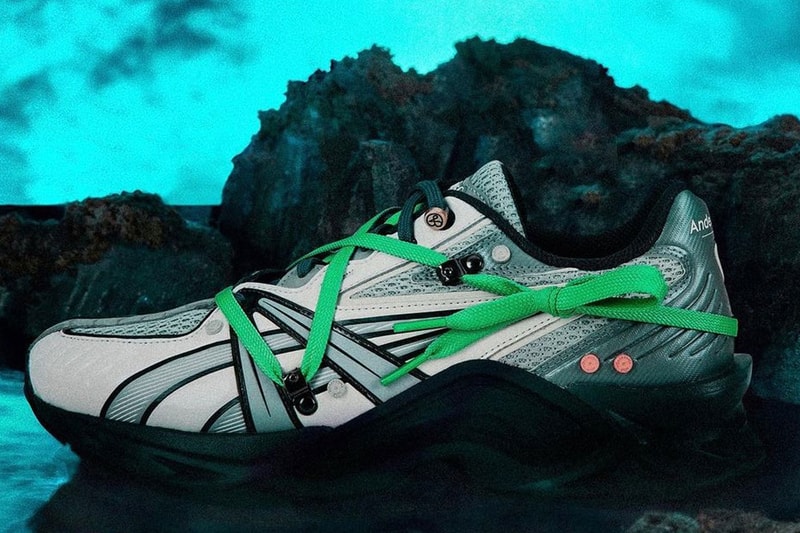 Following initial teaser images released earlier this month, Andersson Bell and ASICS have now offered a closer look at their special-edition GEL-1090 runners, the duo's second collaborative offering. Continuing the hiking-inspired sensibilities from the first collaboration, the upcoming pairs arrive in a matrix of laces secured by heavy-duty metal fasteners and branded metal studs found on classic mountaineering boots. Underneath is a breathable mesh base and patent leather overlays accented with a medley of contours and perforation. Rounding out the silhouette is a boomerang-shaped cushioning piece integrated into the GEL™  rubber midsoles and traction outsoles.

The sneakers arrive in three colorways, taking inspiration from childhood films that intrigued the Andersson Bell team when they were young. The first iteration is an interpretation of a temple in the jungle ruins of Indiana Jones, the second worldview paints a story of the shark in Jaws becoming a zombie which is then tamed by a legendary fisherman who tames the zombie into a boat, and the third is an expression of the Batmobile from Batman imagined with cutting-edge materials and tech found in ancient caves.

"Each of these worldviews leads to a fact that they are actually one island in one world," Andersson Bell writes in the description. "We live in a world where many parts have become digitalized. This project started with our aim not to show contents that exist only in the digital world and do not exist in reality. We wanted to show real contents that are painstakingly created one by one with analog sensibility."

The Andersson Bell x ASICS HN2-S PROTOBLAST series is set to release globally on the ASICS website and select retailers on May 27.

Elsewhere in footwear, NOAH and Vault by Vans reunite for beachy Slip-Ons.