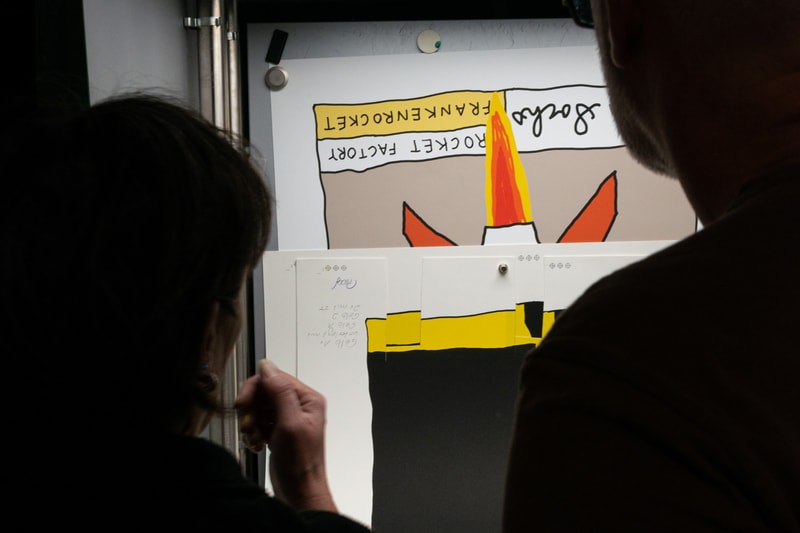 For those desperate to own an original Tom Sachs artwork, Avant Arte is set to make it a little easier. The platform, dedicated to making art ownership "radically more accessible", has announced a collaboration with the revered New York-based artist, which will see a screenprint sold at €750 (approximately $740) over the course of a 24-hour period.

The collaboration came about after Avant Arte co-founder Christian Luiten – who also serves as the company's Head of Artist Community – first met Tom in 2019 for a studio visit. Here, they discussed doing a print together but wanted to wait until the moment was right. That moment came about three years later when in 2021, Luiten met with Michael Govan, the Director of LACMA. At the time, the institution was working with Sachs on the Rocket Factory, and after a conversation about fundraising, the trio arrived at the idea of creating a print that would support LACMA – in the same way, it had supported Sachs. 25% of proceeds from the €750 print will go directly to LACMA. "LACMA is more than a museum, it’s a cultural institution and there's no institution that's had a greater connection with art and technology," adds Sachs.

On face value, and in true Sachs style, the print appears uncomplicated – block colors and unfussy shapes are favored over highly detailed linework. But in reality, the print is the result of hours and hours of experimentation carried out by the Avant Arte and Sachs teams respectively. Here, the team behind the print breaks down the different elements of the print, exploring in deeper detail the techniques used across the work itself, its authentication methods, and the box it'll arrive in. Typically in screenprinting, you would apply all dark colors last, layering them on top of the lighter shades. But for Sach's piece, the team wanted to create an effect that appeared tactile and "elevated" – enabling it to appear almost sculpture-like upon the page, and as such began with a dark background, with all of the lighter colors printed over the top. With the bright yellow, for example, the application process is repeated and cured a number of times to build up its opacity. Crucially, though, it means that there are no joins between the colors, as you may see in a more typical print. Instead, it comes across as more of a painting. A number of authentication methods exist on the Too Darn Hot work. But a crucial element for Sachs was that he wanted to blend the physical with the digital, in a similar fashion to the existing Rocket Factory project. The first of these is a QR code, which is hidden on the print and is almost invisible to the naked eye. Underneath UV light, it becomes visible, and when scans take you to the original NFT of the rocket at LACMA. The code has been printed with invisible ink – the kind that you might get on a nightclub stamp or used to print money. There are two stickers on the print. The first is a specially designed holographic sticker created by Sachs, which also features the rocket seen on the print. Located on the back of the print, the sticker was designed so if you tried to peel it off – it would actually ruin the artwork. Next to the sticker is a second QR code that allows collectors to claim an accompanying NFT, which serves to authenticate the print by linking the print edition number to the owner's digital wallet. In the top left-hand corner of the print is a debossed design with unique hand-stamped numbering. This intricate detail is one of the oldest forms of authentication and was first established in the 15th century to be used by notaries and public officials. According to the team, it took a long time to get this element right – which a lot of research and development required. The depth had to be correct, but the surface of the ink needed to remain unaffected. Rather than using the standard Avant Arte ancillaries that come alongside a purchased artwork, Sachs – ever the perfectionist – was keen to create his own. He adapted the design of the print box itself and opted to leave both that and the gloves totally free from any branding. Given that the box is so plain, it appears almost "mysterious" when it arrives. Inside, a space is cut out in the foam for a specifically sourced brown envelope to sit, which includes a certificate of authentication and a pair of art-handling gloves.