The Golden State Warriors Are Your 2021-22 NBA Champions 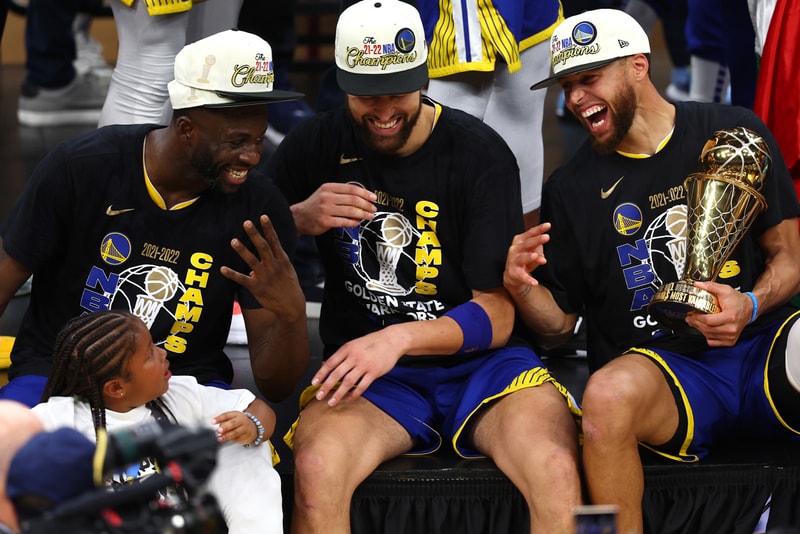 After a three-year slump, the Golden State Warriors come out on top once again, clinching their fourth title in Game 6 against the Boston Celtics (103-90) in TD Garden. The championship win marks GSW's fourth title in the last eight seasons and the franchise's seventh title overall, breaking its tie with the Chicago Bulls (6) to become the third most successful franchise in NBA history.

The Celtics started the game hot, taking a short-lived 14-2 lead before Golden State fired back with a 35-8 run, ending halftime at 54-39. While the Celtics were able cut the deficit to 76-66 entering the fourth, the Warriors held onto their lead to cement their legacy.

"Beginning of the season, nobody thought we'd be here except everybody on this court right now. Very surreal," said Curry post-game.

While celebrating with his teammates on stage, Draymond Green shows love to his fellow teammate Klay Thompson, citing him as a key difference-maker. "You watched what he went through the last few years. It's no surprise we sucked," he said. "My brother is a champion, he don't lose. We needed him to do this. He back, we back."

Take a look at the early reactions and celebrations below.

The closing call as the @warriors become 2021-22 NBA Champions, winning their 7th title, 3rd most for a franchise in NBA history! #NBA75 pic.twitter.com/nAvn8UlkV9

An emotional moment for Steph Curry as he is an NBA champion once again ? pic.twitter.com/fznajLIG6m

YOU A CHAMP, DRAY! ? pic.twitter.com/KIX5KTInGt