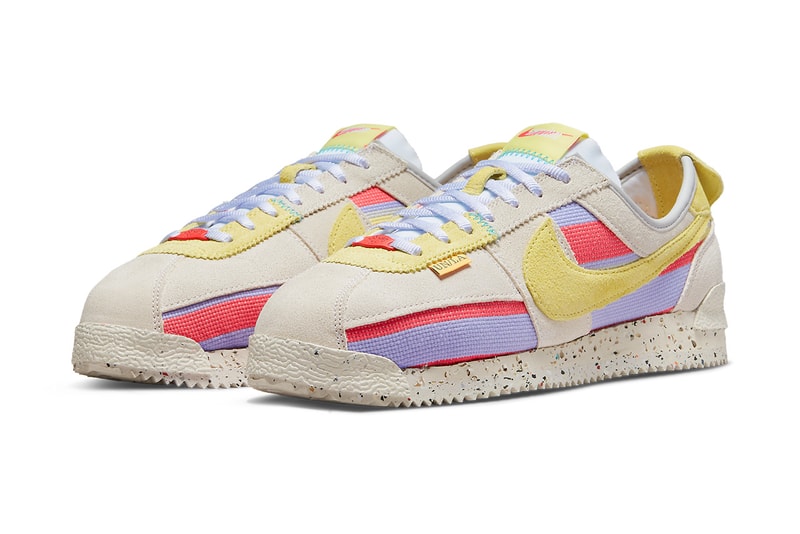 Union LA and Nike Inc. have having themselves quite the year thus far in terms of collaborative offerings. After kicking 2022 off with an impressive Air Jordan 2 capsule and releasing a Dunk Low assemblage, the two parties have now shifted their efforts towards the Cortez. Two colorways have already trickled out into the market, but now Chris Gibbs and his team have prepared two more offerings to complete the set, both of which have now just been unveiled by way of official imagery.

Much like the first pairs to launch, it's the vivid accents and color-blocking that take center stage. On the first pair, the upper suede panels are mostly treated with a lighter gray hue. Canvas-infused stripes that are located on the side walls alternate between purple and rd while notes of a soft yellow are sprinkled to the Swooshes, overlays on the throat, tongue tabs and heel flaps. Its release sibling comes formed with more muted gray upper panels while Easter-friendly pink and yellow stripes sit adjacent. Doses of a bright blue hue then land on the Nike checks, throat, tongues and heel tabs as well more added flair. Other details to call out include the "UN/LA" tabs that are attached to the forefoot, the boutique's Frontman logo on the heels and their signature motto "Know the Ledge" on the interior sides of the tongues.

Sit tight for further release info as these could be dropping in the near future.