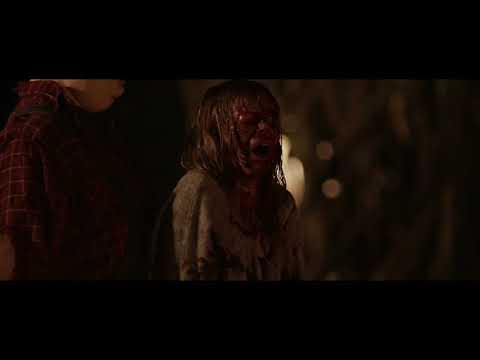 The movie follows Winne (Craig David Dowsett) and his best friend Piglet (Chris Cordell), who enter a feral rampage after their human friend Christopher Robin (Nikolai Leon) departs for college. Providing a first look at all of the horrors headed to Hundred Acre Wood, the twisted trailer sees the bloodthirsty animals stalking human prey and the two titular liquids being mysteriously poured into the same vessel.

Rhys Waterfield, who directs the movie, is producing alongside Scott Jeffrey's Jagged Edge Productions and ITN Productions. Aside from Dowsett, Cordell and Leon, the movie stars Maria Taylor as Maria, Danielle Ronald as Zoe, May Kelly as Tina, Natasha Tosini as Lara and Amber Doig-Thorne as Alice, among others.

In a previous interview with Variety, Waterfield disclosed that the slasher was shot in just 10 days near the Ashdown Forest in England, which served as the inspiration for the original story's setting. In terms of the film's overarching tone, the director explained that Blood and Honey will effectively balance its absurd themes with its scream-inducing agenda.

“When you try and do a film like this, and it’s a really wacky concept, it’s very easy to go down a route where nothing is scary and it’s just really ridiculous and really, like, stupid,” Waterfield told the outlet. “And we wanted to go between the two.”

A.A. Milne's books entered the public domain on January 1, allowing anyone to create their “original iterations of Pooh” and incorporate them “into any of [their] creative work” including movies, musicals and plays, according to Jennifer Jenkins, director of the Center for the Study of the Public Domain at Duke University. Disney still owns the rights to the cartoon iterations of the famed character.

Winne the Pooh: Blood and Honey does not yet have an official release date. Watch the trailer above.

Elsewhere in entertainment, watch Chris Rock and Javier Bardem go head-to-head in a new Look at Me teaser trailer.