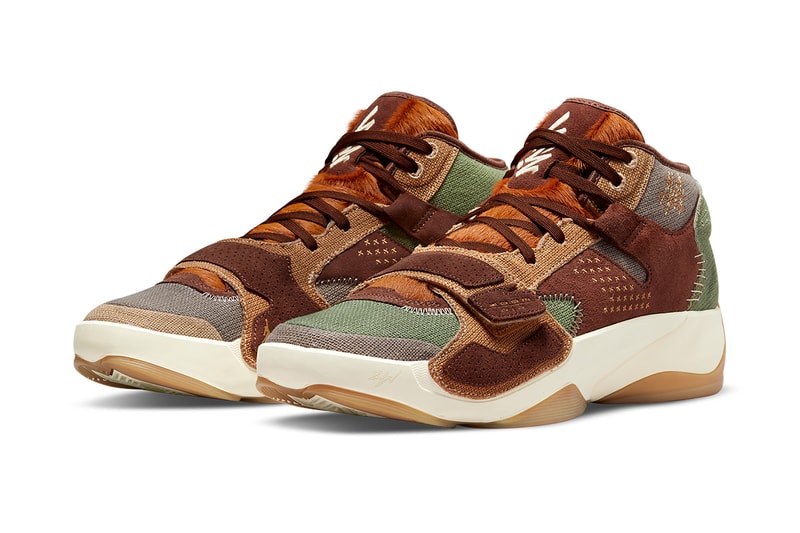 After developing a full-fledged footwear and apparel collection devoted to his love for Naruto, Zion Williamson is soon expected to unveil the next chapter of his signature footwear family in the Jordan Zion 2. The high-flying dunking machine has yet to officially announce the shoe, but we're already starting to see of its most striking colorways trickle out onto the Internet, the latest being the Jordan Zion 2 "Voodoo" iteration. The pair likely speaks to the superstitious concept of New Orleans Vodoo — an African diasporic religion that originated in Louisiana where the Pelicans are based.

Upper halves of this court-ready offering are equipped with a busy ensemble. Standout elements include that of the furry textures that run the length of the tongue and throat as well as the exposed stitchings that are present throughout the base which channels the look of an actual voodoo doll. Gray and green panels are both found on the mesh underlays and arrive in reverse fashion between each foot. Skull-like faces with button eyes are pasted to the back while Williamson's official Jordan logo makes its way onto the tongues. Heel molds split between Air Strobel branding on the left foot and "Let's Dance" on the right to call out the Duke alumnus' favorite quote, and the insoles alternate between "Voodoo" text on the left side "Zion" hits on the right.

Check out the kicks and their special packaging here above and anticipate these to hit the shelves in the coming months.

Elsewhere in sneakers, Jordan Brand is coming out with another Air Jordan 36 "Year of the Tiger" colorway.