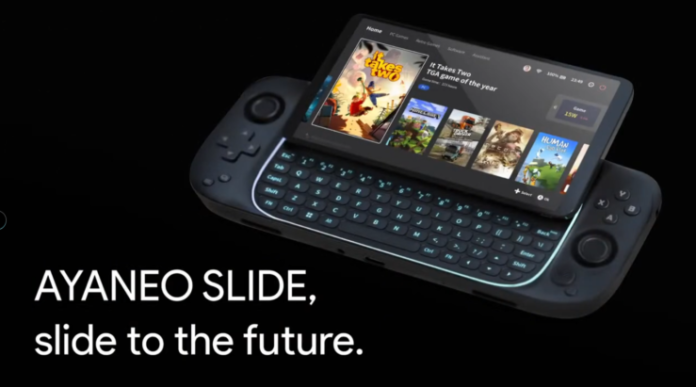 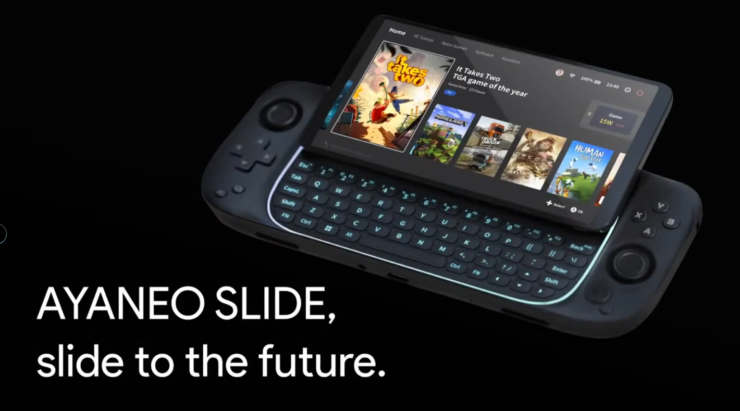 AYANEO recently published a video to showcase the company's line of handheld consoles and also released information for a new game console offering an RGB backlit slideout keyboard called the AYANEO Slide. The product, which shares identical specifications as their previously released AYANEO 2, allows users to use the keyboard not only for input in games but also for chatting and more.

The below video shows the entire product line demonstration, offering several developments and explanations of the future of AYANEO. You can skip ahead to the 1:00:00 mark, which will be close to where the company shows several of its existing and upcoming handheld gaming consoles.

The new Slide handheld gaming console will offer an AMD Ryzen 7 6800U CPU with the company's Radeon 680M graphics processor. Compared to the Steam Deck, the AYANEO Slide is anticipated to deliver twice the FLOPS as the Valve handheld. As for the system design, the Slide maintains the smooth curved design we have seen with previous iterations from the company over the last several months — a step away from the hexagon shape reminiscent of the GPD Win3 system.

Along with the announcement, the company is also releasing a game launcher for non-AYANEO systems, dubbed the AYA Space, but has yet to reveal a release date for the application. Also, the Slide has not received a release date, but it is anticipated to be 2023 before we see the new system hit the market, where we will also see the pricing for the new system. Current pricing for the handheld gaming consoles has surpassed the $1,000 range, which is well over the $399 price for the entry-level Steam deck.