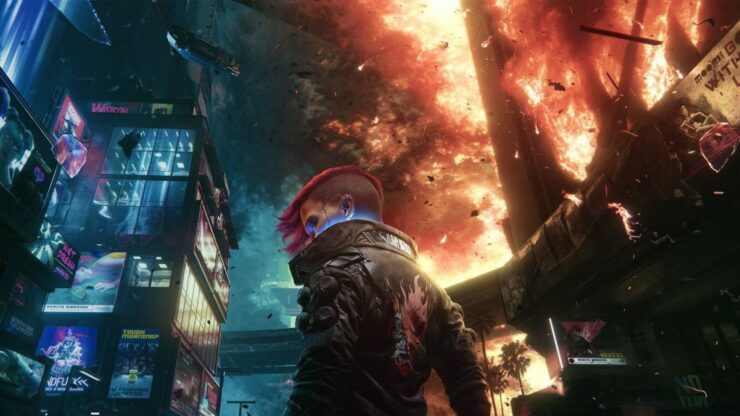 Cyberpunk 2077’s launch was quite the bumpy road, as its console versions were easily broken enough to warrant PlayStation removing them from the storefront; definitely not a good look optics-wise. The story behind the launch continues to develop even now, as a whistleblower passed information off to Upper Echelon Gaming last week claiming that Quantic Lab, a CDPR QA studio, had something to do with the game’s disastrous launch issues.

In the 72-page document that was sent out, the whistleblower pointed out that Quantic Lab lied about the team’s seniority and size, and that a bug-reporting quota sent in thousands of less important issues to be fixed, consequently taking time away from the more major ones still in the game.

When prompted, Quantic Lab’s CEO, Stefan Seicarescu, provided an answer to Forbes that, for the record, doesn’t fully address what they’re being accused of, but still, it’s as follows:

Concerning the article published in Forbes on June 26th, Quantic Lab’s would like to clarify the following:

The video published on social media as mentioned in your article starts with incorrect statements about Quantic Lab’s history. There seems to be a lack of understanding in the process of how a game is tested before its release to the market.

Quantic Lab was founded in 2006 with a team of twelve, fully focused on Quality Assurance, and has since then grown into a leading QA company with more than 60 active clients, and more than 400 employees in 3 office locations in Romania. Quantic Lab supports over 200 projects per year from several global leading publishers and continues to maintain a quality comes first approach to all the work we undertake.

All our customer agreements are confidential but in general, global publishers are working with several QA outsourcing companies, not depending solely on one, in addition to internal QA resources at developer level in most cases. Each project we undertake is unique with regard project requirements. Project direction is agreed and adjusted accordingly as per real time requirements with our clients.

Quantic Lab always strives to work with transparency and integrity with our industry partners.

Out of everything in that 15-minute video, they took issue with “incorrect statements” and also said that Upper Echelon got the information wrong. Furthermore, it mentions that a game of this scope wouldn’t be in the hands of just CDPR and one lone QA studio.

Another thread from Twitter user LegacyKillaHD notes that the blame still is on CDPR’s management more so than Quantic Lab majorly. He also notes that he spoke with a few CD Projekt Red sources about it. You can read his thread below. 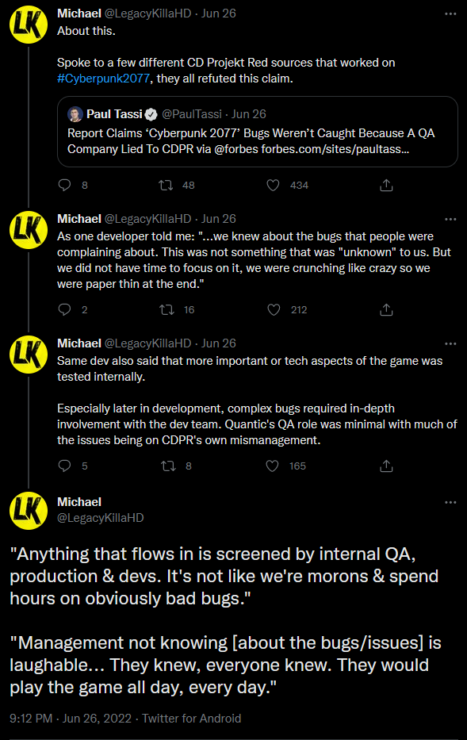 Overall, the thread denotes that the final result still falls on management, and says something like the Quantic Lab statement (being that QA testing is done by multiple groups rather than a singular one). Even if Quantic Lab isn’t guilt-free here, it’s a lot more on, again, CDPR and their management for sending the game out to launch in such a state.

We’ll continue to update as the story develops. Cyberpunk 2077 is out now on PlayStation 5, PlayStation 4, Xbox Series, Xbox One, and PC via Steam.

The post Cyberpunk 2077 QA Team Responds to Whistleblower; Claims There Are “Incorrect Statements” by Ule Lopez appeared first on Wccftech.