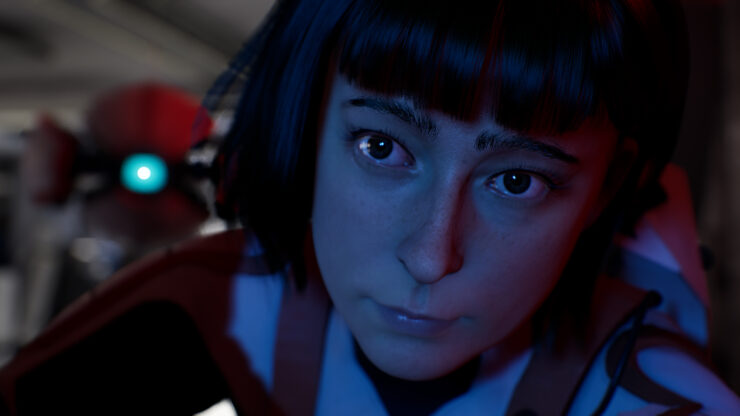 Deliver Us Mars takes place ten years after the events of the critically acclaimed game Deliver Us the Moon. Frontier promises “threads and characters” from the first game are returning. They also promise more cinematic storytelling, with full motion-captured cutscenes (the first game mostly told its story through gameplay, with any cutscenes being very simple).

The game tells the story of Kathy Johanson, who joins the crew of the Zephyr space shuttle on a desperate mission to the Red Planet. Their goal is to save a rapidly-declining Earth by retrieving vital colonization vessels known as the ARKs, which the shadowy organization ‘Outward’ stole years earlier.

Kathy has another personal motivation for joining the mission to save humanity, however: her father, Isaac, joined Outward on its escape to Mars after being forced to leave his daughter behind when she was a child. Now, after a mysterious message from the Red Planet hints at a connection to her past, Kathy is determined to discover its source.

To progress through the game, players will have to face complex puzzles, scuba diving, floating in zero gravity, and even executing a thrilling launch sequence inside a spaceship. The game also has an action-packed story that mixes epic stakes, personal drama, and an unsettling larger mystery. Players who want to find out what happened to Kathy's father will be able to do so on consoles and PC.

So, when does the game release? Well, Deliver Us Mars will be available on PC, Xbox One, Xbox Series X/S, PlayStation 4, and PlayStation 5 on September 27.