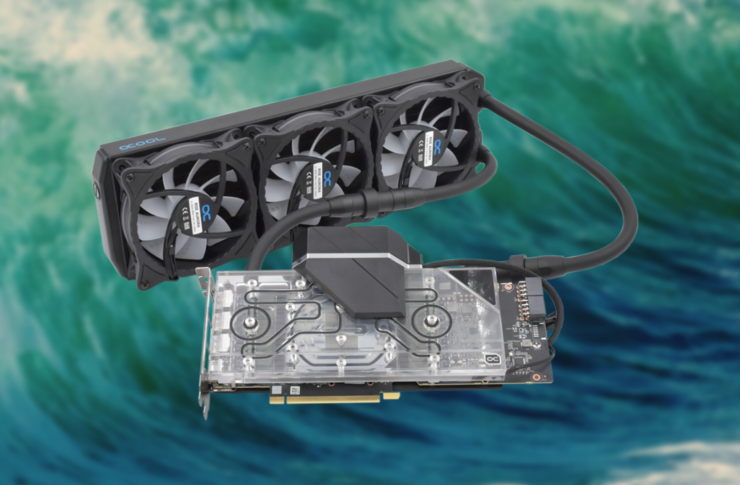 Japanese manufacturer, ELSA has revealed the company's GeForce RTX 3090 LC graphics card that is equipped with a custom-designed AIO liquid cooling kit. The graphics card debut seems odd because the graphics card was released over a year ago.

What sets the ELSA GeForce RTX 3090 LC GPU with liquid cooling apart from other premium offerings from other manufacturers is that the card utilizes a custom water block with a built-in pump that is equipped with a 360mm AIO radiator and covers the GPU along with the memory and VRM area. ELSA developed the water block, pump, and external 360 mm radiator with the company AlphaCool.

The ELSA GeForce RTX 3090 LC is equipped with the ultra-high-end GPU NVIDIA GeForce RTX 3090 based on the NVIDIA Ampere architecture. The product is supplied with Alphacool's water cooling unit — the Eiswolf 2 AIO water cooler — a product known for its exceptional performance in proper cooling.

A typical graphics board uses an "air cooling" method that combines a heat sink and a fan with an air volume that matches the heat dissipation amount, which is designed according to the heat generation amount of the installed GPU. The more GPUs you have, the more you need to combine a large heatsink and fan, causing the graphics board to become thicker.

The GPU cooler, which is also the biggest feature of this product, uses the high-performance water cooling unit Eiswolf 2 AIO manufactured by Alphacool of Germany, which has a good reputation for cooling performance.

In the case of water cooling, no matter how high the performance of the water cooling head part that cools the GPU part, if the heat absorbed there cannot be efficiently released to the outside of the case, the temperature of the cooling water will rise. This product adopts the largest class unit for this radiator part, which is supposed to be incorporated into a general PC case of 360 mm class and makes it easy to control the temperature of the cooling water.

Due to recent GPU high performance such as RTX technology, the thickness of the graphics board is becoming more and more common as three-slot occupancy, but ELSA is concerned about this situation and is only two slots in size. [...] This product also maintains this tradition, and water cooling has made it possible to fit it in 2 slots despite being equipped with an ultra-high performance GPU...

Users can purchase the ELSO GeForce RTX 3090 LC on the company's website for ￥307,980, or $2,275. While the price seems relatively high for a graphics card, especially as of recent events, readers should remember that a premium AIO cooling unit is included with the high-end card, and pricing in Japanese markets tends to run higher than in other locales.