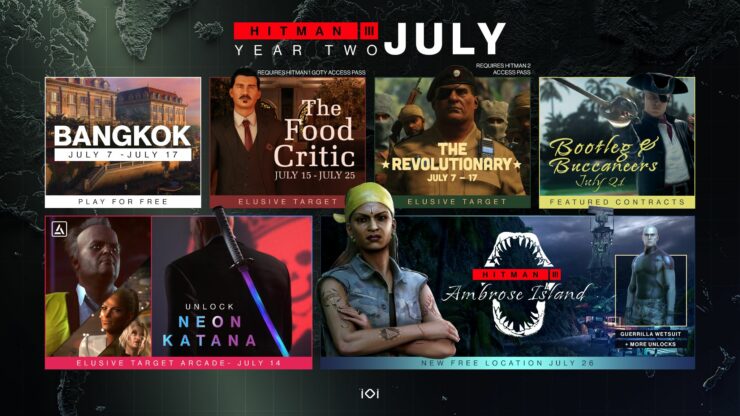 IO Interactive has made a new roadmap covering the updates Hitman 3 will receive during July 2022. This new roadmap brings some new details about the game's upcoming new location known as Ambrose Island. Additionally, we have some new information regarding the Elusive Targets that will be available throughout the month and the current Free Map.

So, let's start chalking it down. Bangkok is going to be available for free for users to play from July 7 to July 17. The roadmap also shows us new details regarding the game's upcoming location Ambrose Island. This uncharted island is a hidden cove, home to a dangerous pirate syndicate operating in the Andaman Sea and to many hidden secrets. It'll be free for all owners of Hitman 3.

You can watch the location reveal trailer for Ambrose Island below:

The Revolutionary is the second Elusive Target that is going to be available throughout the month of July. This Elusive Target will be available for Hitman 3 players from July 7 to July 17. Vicente Murillo will be patrolling Santa Fortuna again, for 10 days. Also, if you're looking for a new weapon to expand your arsenal, you'll be happy to know that the Elusive Target Arcade will bring a new unlock.

Beating any of the batches in the Elusive Target Arcade will allow users to unlock the Iridescent Katana. Yes, it's literally a Neon Katana, and it should be clear why that is a must-have for any fledgling Hitman 3 player. The Katana will also make the blood you spill blend in with the motif of the blade, so that's also a nice bonus.

Finally, we have the return of certain Community Featured Contracts to celebrate the upcoming release of Ambrose Island. What's better than a map chuck-full of pirates? Well, being able to dress like one, of course. If you want to get your contract Featured, you have to create a contract based on a super creative briefing, a cool idea, or just a plain fun challenge. All while sticking to the pirate theme. If you think you've got what it takes, then bring your ideas to the forum once submission threads open up.

July 26 will be the day when Ambrose Island becomes available for users. Besides the new location, the game will also receive an update. The update will feature fixes for some community-reported issues and some Quality of Life improvements. More details regarding this upcoming patch and Ambrose Island will become available closer to release.