Intel & AMD Inside The Same PC! Yep, The DG1 Graphics Card Has Been Made To Run on An AMD Ryzen PC 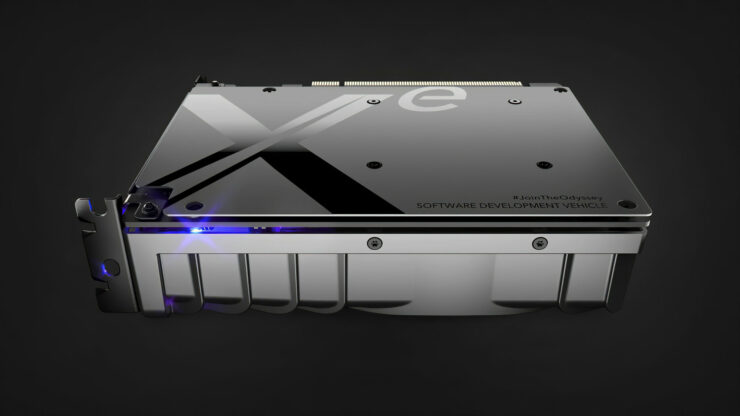 Twitter leaker 9550pro found a post by Misaka_9993 on the Chiphell forums about the user taking an Intel DG1 dGPU, made by manufacturer GUNNIR, and using it on a system that is based solely on AMD's Ryzen platform. The test results are surprising because the DG1 discrete graphics cards are incompatible with AMD-based motherboards, or so we thought.

Intel's First Desktop Graphics Card Can Now Run On An AMD Ryzen PC But Not Officially, Yet!

Misaka_9993 initially sought to purchase the Inte DG2 Arc Alchemist graphics card, but accessibility and high costs for the Intel GPU are still relatively high worldwide. The user decided to buy the GUNNIR DG1 GPU, offering 80 EUs onboard, the first Intel Xe-based GPU released in the second half of 2021. GUNNIR designed the card around the Xe-LP architecture, and the card is the first customized design seen upon the launch of Intel's new architecture. Website VideoCardz mentions that "this should be either Iris Xe or Iris Xe Index V2."

Intel DG1 series dGPUs are reported to not be compatible with AMD motherboards by the company. That did not stop the Chiphell forum member from taking an AMD Ryzen 7 5700G integrated Vega GPU and an ASUS ROG STRIX X570-I motherboard and combining the three to do the DG1 dGPU work.

Misaka_9993 utilized UEFI and disabled the CSM to boot the system from the AMD Ryzen 7 5700G integrated Vega 8 GPU. From there, the system can output the graphics signal through the GUNNIR DG1 dGPU's HDMI connection. This action allowed the user to display two separate GPU-Z windows working together. The AMD Cezanne Vega 8 GPU is pictured on the left, while the Intel DG1 dGPU is on the right in the example below.

The Intel discrete graphics card performs far less than the AMD Vega graphics, as pictured below in the AIDA64 benchmark screenshot on Chiphell. This configuration is less typical but proves that the Intel DG1 dGPU can run on an AMD-based motherboard, even with little work. The output given by the Intel dGPU is not ideal for gaming and is only remotely decent for media.

Readers should remember that the Ryzen 7 5700G supports PCIe Gen3 x16 while the Intel DG1 supports PCIe Gen4 x8. This test causes the AMD card to minimize the bandwidth to 8 lanes instead of 16 lanes.

Even though the cost is much higher, the Alchemist DG2-128-based Arc A380 GPU is the next-gen version of the Intel DG1 card used in the test. Also, the card is much harder to come by than the Intel DG1, which was the initial starting point for the company to create a discrete graphics card for their systems.

The post Intel & AMD Inside The Same PC! Yep, The DG1 Graphics Card Has Been Made To Run on An AMD Ryzen PC by Jason R. Wilson appeared first on Wccftech.