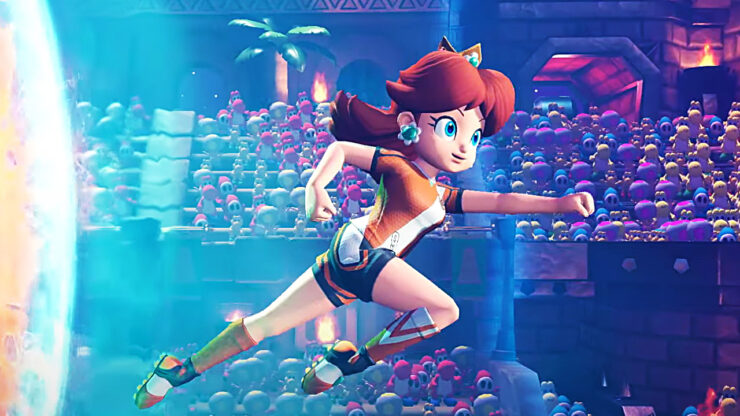 Mario Strikers: Battle League is a fun game of Mushroom Kingdom footie, but the game launched with a pretty serious lack of content. For instance, the game arrived with only 10 characters, with a certain, shall we say, passionate fanbase being particularly upset Princess Daisy wasn’t in the game.

Well, good news you Daisy freaks, Nintendo and Canadian developer Next Level Games have announced Mario Strikers: Battle League’s first free content update, and the princess who isn’t Peach or Rosalina is included. The update will also include the new Shy Guy character, another arena, and a set of knight-themed gear. You can check out a trailer for the Battle League update, below.

It's a decent selection of stuff, and the Daisy fans ought to be happy, although Battle League could use even more content. Nintendo has said two more content updates are scheduled for the rest of 2022. Hopefully, that’s not all we get (dataminers have discovered an additional 10 character slots for the game). Haven’t been keeping up with Mario Strikers: Battle League? As I mentioned, I found the game to be fun, if a bit shallow, in my full review…

"Mario Strikers: Battle League delivers the frantic fun the franchise is known for, but it feels like it’s only fielding half a team. It’s hard to overlook the missing characters, stadiums, modes, and mechanics from previous entries in the series, and new online and character customization options aren’t fleshed out enough to make up for what’s been left behind. Battle League will likely be worth it for hardcore fans with a good collection of friends to play with online or locally, but those hoping for more may find the game drifts just wide of the goalposts."

Share
Facebook
Twitter
Pinterest
WhatsApp
Previous articleNo More Heroes 3 Comes to PC on October 11, Consoles on October 14; Day 1 Edition Pre-Orders Now Available
Next articleWhy There’s a Delay Before Your iPhone Screen Turns Off (and How to Eliminate It)