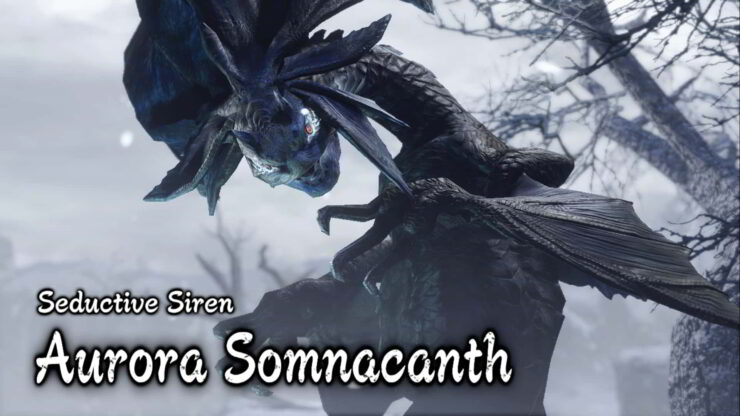 Monster Hunter Rise: Sunbreak introduces a new ice subspecies of the Somnacanth, called Aurora Somnacanth. This monster is deadlier than the standard type, resistant to most elemental attacks and immune to Sleep, and can rely on new, unique attacks to use against hunters. Once beaten or defeated, however, it will eventually drop good materials for crafting.

Let’s dive into how to beat Aurora Somnacanth in Monster Hunter Rise: Sunbreak, its weaknesses, and tips for winning the fight.

This monster is a Leviathan type with a threat level of 6 stars out of 10. It can be found both in the Frost Islands and the Citadel. Aurora Somnacanth moves a lot during the fight and tracking it can be difficult during a battle. Its icy breath can freeze you, so keep a safe distance from the monster when the animation for this attack starts.

Aurora Somnacanth also has a long tail that can be used to perform fast and strong attacks, and its body slams are powerful as well. However, they can be avoided quite easily because you will see them coming and have enough time to react.

Aurora Somnacanth is weak to Fire and Thunder and resistant to the other elements. As for ailments, Blast and Fireblight are the most effective against this monster, so you can use a helper like the Firebeetle to deal constant damage against it. You might also want to use a Fire elemental weapon, as it is the most effective type. Try to aim at its neck, which is its weakest part, followed by the head and the tail.

How to Beat Aurora Somnacanth

Aurora Somnacanth slides and circles around more often than the standard Somnacanth, so you might have a hard time escaping its attacks. However, it is not the fastest monster of Sunbreak, so you will probably be able to dodge most of its attacks. Try to keep a certain distance between you and the beast: this way, you can observe and study its moves and then counter-attack accordingly.

You can evade most of its assaults by rolling sideways, as the Aurora Somnacanth will mostly attack forward. Use your Wirebugs as well, as they can help you escape more easily. Be aware that, like the standard monster, this subspecies can throw its fins at you, dealing enough damage. Even if you dodge them, they will be stuck on the soil and act as an annoying trap.

Its body slam is also quite dangerous, but you will recognize it as the animation lasts a bit, so you can dodge it accordingly. Its ultimate move features multiple icy explosions that will significantly damage you and inflict Iceblight if you get caught. However, you can throw a Flash Bomb at the monster to instantly stop this attack. If you get this blight, you can eliminate it by using a Nulberry. Make sure to bring them with you during this quest, as you might need them more than once. Once beaten or captured, you will eventually get good rewards to craft new armor and weapons.

If you need help with other Sunbreak monsters, you can find our guides here: