Nightingale Shows Off its Realm Card System, Base Building, and More in a New Trailer 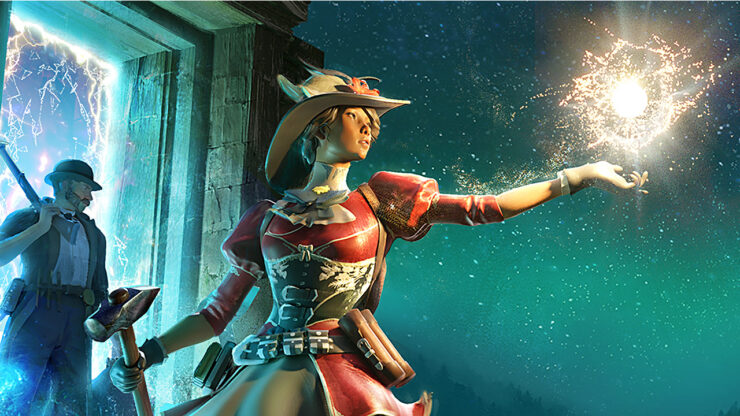 Nightingale, the new Gaslamp survival game from former BioWare general manager Aaryn Flynn and his Edmonton-based studio Inflexion Games just released an intriguing new trailer at the Summer Game Fest Kickoff Live show. The main focus of the trailer is the Realm Card system. You’ll be able to craft these cards, which will determine the types of realms you’ll explore when played in various combinations. For instance, by combining different cards you’ll be able to determine a realm’s general environment, weather, enemy types, and more. Of course, the new trailer also provides a look at some new baddies, weapons, and other elements. Check it out below.

Opening a portal in Nightingale is no small feat, and to transition an inert portal arch into an active gateway to another realm you’ll need to provide direction and focus using Realm Cards. Exploring the realms and acquiring magickal ingredients will allow you to learn recipes and craft new Realm Cards, and you will select a limited number of cards to play in combination. This combination is what will dial you in to which out of the many possible realms within the Fae universe you are heading to next.

Some cards will have a major effect on the environment of your destination, with all the corresponding variety you’d expect in the flora and fauna calling that realm home. Others will have more specific impacts such as the weather you’ll endure, which may have knock-on effects, such as how creatures behave or what plants thrive. Will your realm be overrun with dangerous creatures? Be a tranquil place to catch your breath? Will it be filled with abundant natural resources, or scattered with the ruins and remains of previous explorers? Dark and battered by storms, or clear and lit up by strange celestial bodies?

Something we wanted to provide with the Realm Card system was mastery not through memorization, but through a sense of discovery as you try a variety of combinations and observe the results. Cards don’t often have just a simple and singular impact - they behave differently in combination with other Cards, and impact the realm in deeper systemic ways, creating an aggregate effect. Using a new Card to find new types of Realms is straightforward, but fully understanding how to best take advantage of that Card to get just the kind of Realm you want will require playing with different combinations and studying not just what changed on the surface, but the underlying reasons why those changes happened.

Nightingale is aiming to launch in Early Access on PC toward the end of this year. A closed beta has been promised for this summer.

The post Nightingale Shows Off its Realm Card System, Base Building, and More in a New Trailer by Nathan Birch appeared first on Wccftech.