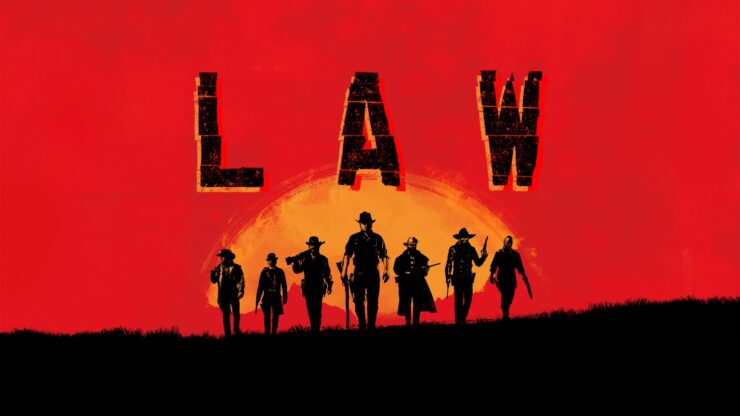 Today, modder SerjRozov uploaded a Red Dead Redemption 2 mod called Law that aims to overhaul the crime system of Rockstar's acclaimed open world game. The goal is to deliver a more realistic and logical response of the Law to criminal behavior.

• Law dispatch timing does really depend on a distance from town with this Red Dead Redemption 2 mod because the map is divided into zones - rural (~500m,), local (~1km), wilderness (untill the map ends). So no more instant lawmen in the middle of nowhere. Unless you're "lucky" enough to stumble on a random patrol group. The chance of it spawning though is 15%.

• Beware both local and wilderness dispatch groups are now searching for you with dogs.

• Bounty level for a number of crimes you've committed will also impact on the amount of lawmen coming to hunt you down.

• If you nailed down the dispatch group in the local/wilderness areas - dispatch will end, untill the next witness. Rural lawmen will have reinforcements if you'll decide to gun them down.

• All regions have been treated, except: Guarma, Aquasdulces, Elnido, Manicato, Sisika, Wapiti, Occupied Caravan Camp. Those will be added in the next update.

• Each town got its own treatment in this Red Dead Redemption 2 mod. Remember how Marshals just spawned outside of Valentine's saloon? Now they'll get into small towns on a wagon. Pinkertons, dogs, US army, gatling wagons.

• Gatling wagon can be seen in Valentine and Saint Denis rural areas and was made to be used with SergeantJoe's mod: 6th Star specifically - GatlingWagons.asi file that you'll find inside his mod's folder).

• Every crime is there, nothing has been disabled. It's just some of them now work a little different.

• Now you won't be sentenced for Assault, Lasso Assault, Unarmed Assault, Disturbance if those were motivated by Self Defence reasons.

• Unarmed Assault can be triggered if you started it, though you have time to change your mind. If you ended up knocking out a ped, law will make you a suggestion to leave. If you are a serial killer "boxer" they'll hunt you. Since the game can't differ man and woman ped I had to make this compromise.

• Hassling isn't a crime untill the god law notice. It's a kinda compromise too since R* binded a couple of different crimes into one here.

• Intimidation can now be witnessed not only by law.

• Law now reacts to Explosion, Arson crimes more adequately in towns. In wilderness witness must see you to take action.

• No one will snitch on your gun practicing in the wild now. Just respect private property.

• Most of the crimes now actually oblige witness to see you to report on you.

You can check out some example videos of this Red Dead Redemption 2 mod below. Thanks for spotting it, DSOGaming.