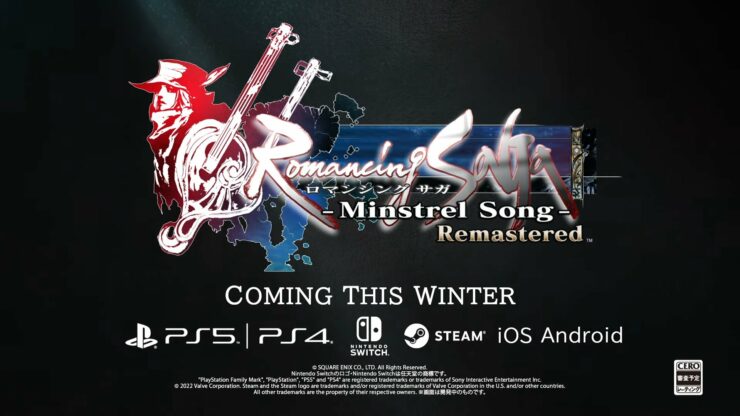 Romancing SaGa -Minstrel Song- Remastered, remaster of the remake of the original JRPG released back in 1992, will launch this year on PC, consoles, and mobile.

The remaster, which has been announced today during the Series Official Broadcast, will feature improved visuals as well as other improvements. The game will launch sometime this Winter on PC, PlayStation 5, PlayStation 4, Nintendo Switch, iOS, and Android, as confirmed on the newly launched official website.

In the long, long ago of 1992, Square Enix released the fantastic Romancing SaGa on the Super Famicon in Japan. The fourth ‘SaGa’ game, it revolutionized the series with its non-linear structure and innovative mechanics.

It was, as they say, a hit, and its influence is still felt on the series to this day.

13 years later, a remake was released for the PlayStation 2 in Japan as “Romancing SaGa: Minstrel Song”and later in North America as “Romancing Saga”. This new version of the game was faithful to the original but featured impressive 3D visuals and some welcome features that made the adventure more approachable for new players.

Now, 17 years after that, it’s back again - and it’s bigger and better than ever.

A new Romancing SaGa -Minstrel Song- Remastered trailer has also been shared online today, and you can check it out below. The Japanese official website has also been launched today, providing more information on the remaster, story, and more.

Romancing SaGa -Minstrel Song- Remastered launches this Winter on PC, PlayStation 5, PlayStation 4, Nintendo Switch, iOS, and Android. We will let you know precisely when the game launches as soon as an announcement is made, so stay tuned for all the latest news.