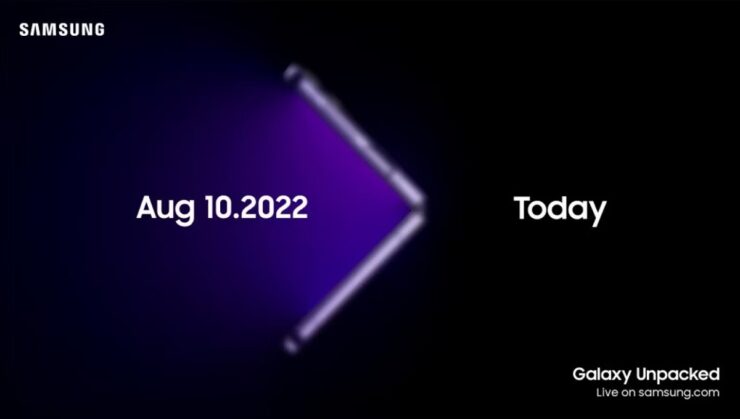 Samsung has confirmed that it will be hosting its Galaxy Unpacked 2022 event on August 10 to unveil its highly anticipated Galaxy Z Fold 4 and Galaxy Z Flip 4 foldable flagships. Other than this, the company might also announce a plethora of accessories. If you are unfamiliar with the details, scroll down to check everything out.

As mentioned earlier, Samsung will be hosting its Galaxy Unpacked event on August 10, 2022. The company will see fit to announce its latest foldable flagships as well as smartwatches. The announcement of the event comes with a cryptic set of images that appears to show letters and numbers. Decoding the cryptic message revealed the number 081022. These numbers translate to August 10th, 2022.

We have a secret to tell you. #SamsungUnpacked

Previously, Evan Blass also revealed that Samsung's Galaxy Unpacked event will be held on August 10. As for what we can expect, Samsung is expected to announce its latest and greatest Galaxy Z Fold 4 and Galaxy Z Flip 4. Both devices have received their fair share of leaks and render in the past and now they are close to the final release. Both smartphones will feature major upgrades when it comes to camera performance with improved photography experience. The Galaxy Z Fold 4 is expected to feature a 6.2-inch external and 7.6-inch internal display and both displays will be shorter and wider.

Other than the foldable flagships, we are also expecting the company to announce the new Galaxy Watch 5 and Watch 5 Pro. While concrete details are short at this time, we presume that the wearables will bring enhanced connectivity and health-tracking services.

This is all there is to it, folks. We will share more details on the Galaxy Unpacked 2022 event as soon as further details are available. What are your expectations from the event on August 10? Share your valuable insights with us in the comments section below.