Sony has shared the official PlayStation PC sales numbers and forecasts huge growth in the PC segment over the next Fiscal Year.

During a business segment briefing, PlayStation CEO Jim Ryan talked about Sony's Game & Network Services Segment, in which he shared some interesting tidbits about the recent PC ports of former PlayStation exclusives.

Released for PC back in August of 2020, the PC version of Horizon Zero Dawn has been performing stellar for Sony. The action RPG managed to sell over 2.39 million copies on PC and harvest over $60 Million USD in Revenue. Sony Bend Studio's open-world zombie action game, Days Gone, was released globally for PC back in May of last year and sold over 852.000 copies as of March 2022 with over $22.7 million USD in revenue.

As revealed by Ryan, the popular PC port of Sony Santa Monica's God of War also performed quite well, selling nearly 1 million copies (971.000) in less than three months (released on January 14, 2022). God of War PC harvested over $26.2 Million USD in Revenue - quite the numbers for these PC ports. 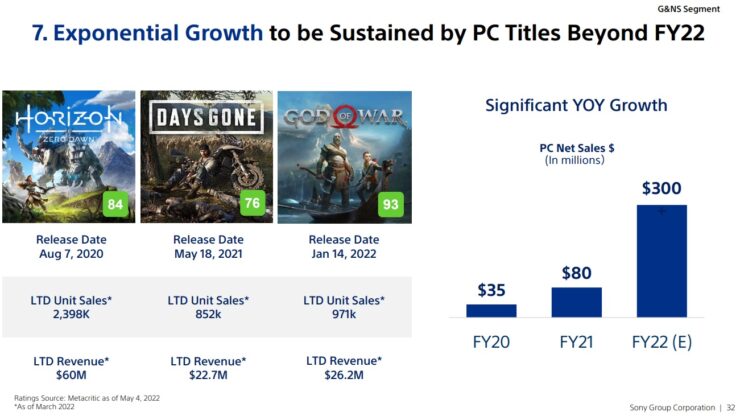 As can be seen in the presentation that was shared by Ryan during the presentation, exponential growth for the PC version of these former PlayStation exclusives has been significant, and Sony expects this growth to be sustained throughout FY2022 and beyond - during FY2020, PC net sales were $35 Million USD, while in FY2021 those grew to $80 Million USD Year-Over-Year.

“I highly respect Nixxes and am excited for this very experienced team to become part of the world-class development community at SIE,” said Hulst last year. “They have a passion for improving games and for delivering the best possible experience for gamers. Nixxes will be a strong asset for everyone across PlayStation Studios, helping our teams focus on their most important goal, which is to create unique PlayStation content at the best possible quality.”

“We can’t wait to get to work and are so excited to bring our technical and development expertise to an IP powerhouse like PlayStation Studios,” said Jurjen Katsman, Founder & Sr. Director, Development, Nixxes. “We’re looking forward to working with some of the most talented teams in the industry to deliver the highest-quality gameplay experiences for PlayStation fans.”