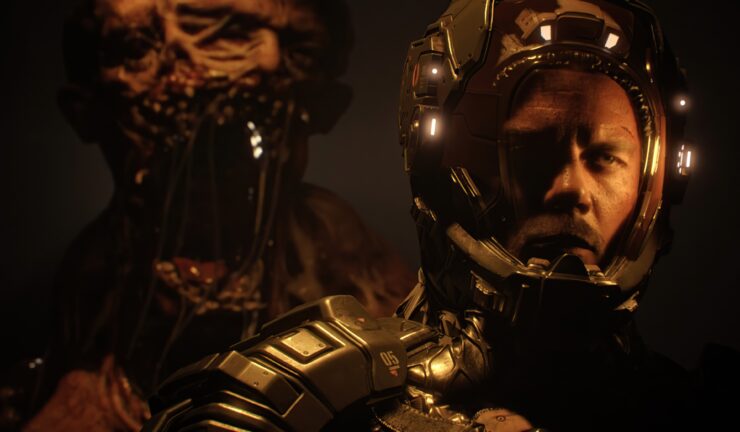 The Callisto Protocol, a Dead Space spiritual successor in development at Striking Distance Studios, isn't set in the PUBG universe anymore. The news came right from Glen Schofield himself.

The Callisto Protocol is its own story and world. It no longer takes place in the PUBG universe. It was originally part of the PUBG timeline but grew into its own world. PUBG is awesome and we will still have little surprises for fans, but this is its own world, story, and universe.

The Callisto Protocol is also prominently featured in the new Game Informer (issue #346), already available digitally to subscribers, and there's quite a bit of new tidbits in there. For instance, the developers clarified that enemies have been designed starting with real humans; they also want players to be scared of single foes.

Character Director Glauco Longhi: These enemies are all grounded in reality. We start with something that was real, and now we are morphing them into something that feels a bit more than real. It's really expanding reality in a way, and we definitely want to piggyback on the idea of unleashing the beast and unleashing the animal. We want this to feel very brutal and scary and intimidating.

Design Director Ben Walker: That's where we started: on the harder side of things to make sure that it felt scary. We want you to be afraid of single enemies. All these tools we built up for Jacob are to deal with the difficulty as opposed to coming at it from the other end of 'Hey, you can do all these cool things, let's make some enemies'. We did in reverse for that very reason. You feel scared, and you have to make the right calls at the right time.

Many of the developers on The Callisto Protocol have worked on the original Dead Space, and they're quite adept at doing something called 'horror engineering'.

CEO and Game Director Glen Schofield: We'll try and get you early in the game; like when you open a door, and something's there. Then, hopefully, you're worried about every door. And then after about five levels, when we don't get you with the door, you kind of let your guard down again, and then we get you. There is a lot of timing.

Chief Development Officer Steve Papoutsis: We have this concept that we're calling 'horror engineering'. Having made a lot of horror games over the years, it's really important for us to make sure that we construct these things in a meticulous way so that they have the maximum impact on players, and they can be memorable and scary and bring out all the tension, terror, fear, anxiety, apprehension that these moments can deliver.

The Callisto Protocol has been recently confirmed to be coming out before the end of the year. It will be available for PC, PlayStation 4, PlayStation 5, Xbox One, and Xbox Series S|X.

The post The Callisto Protocol Isn’t Set in PUBG Anymore; Devs Want Players to Be Scared of Single Enemies by Alessio Palumbo appeared first on Wccftech.