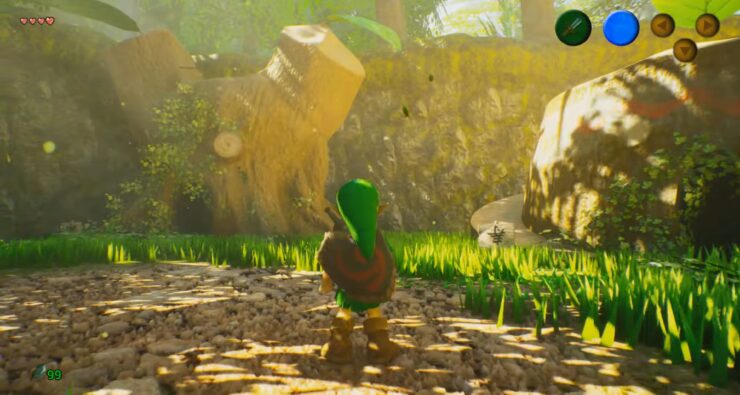 A new The Legend of Zelda: Ocarina of Time Unreal Engine 5 remake video has been shared online today, highlighting some of the improvements brought by Lumen.

The new video, which has been shared on YouTube by the remake's developer CryZENx, showcases the Kokiri Forest area, highlighting the improvements brought to lighting by Lumen, such as lighting bouncing off surfaces. You can check out the video right below.

The Legend of Zelda: Ocarina of Time Unreal Engine 5 remake is a port of another remake developed by CryZENx in Unreal Engine 4. The new remake will take advantage of the unique features of Unreal Engine 5, including the already mentioned Lumen, while also offering NVIDIA DLSS support. More information on this remake, as well as a playable demo and more, are available on the developer's Patreon. A final release date has yet to be confirmed.

A brief description of The Legend Of Zelda: Ocarina of Time Unreal Engine 5 remake from CryzenX can be found below.

Finally ported to UE5 and i dont regret one bit. There is so many new features that can boost up the development. Cant wait to take advantage of it. Also i present the new feature from UE5 called Lumen. That stands for Global illumination ( dynamic lighting ) without baking any light.

Also the project support DLSS from Nvidia. To the people that have a RTX. you can take advantage of it and get a 20% performance boost using it from Quality to Ultra Performance without any Loss quality.

The Legend of Zelda: Ocarina of Time is not only one of the finest entries in the series, but also one of the best video games ever made. Despite its immense popularity, the game has never received a home console remake, having only been remade for the Nintendo 3DS. This remake includes slightly updated visuals and some new features, like new controls, first-person shooting, touch-based inventory system, and more. Even without a home console remake, the game is currently available on Nintendo Switch as part of the Nintendo Switch Online + Expansion Pack subscription.